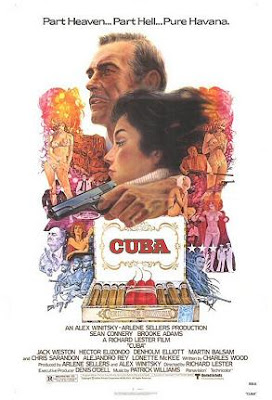 If Sean Connery's James Bond was about English political dominance, Sean Connery's Robert Dapes is about its political irrelevance. In Cuba (1979), which is set in Havana in the year 1959, Connery plays a British mercenary who's hired by the Batista regime to help them stop Castro from taking over. (Viewers shouldn't be shocked by how that ends up.) Dapes is never particularly invested in the job, but that seems to be true of his attitude in general. He's a jaded ex-soldier who has accepted the ways of the modern world and has learned how to capitalize on them. While in Havana, he runs into an old flame, Alex (Brooke Adams), now married into a prominent Cuban family. Alex runs her husband's factory while he runs around with women. (He's also fond of booze and gambling.) Their marriage is unhappy, but she likes the control she has over him, doling out money to him when he needs it, and managing their capital.

Cuba isn't bad. Director Richard Lester has a clever sense of humor, which keeps this from being self-serious. It's sort of a modern-day Casablanca, except that nobody saw it in 1979 and nobody remembers it now. And while it is about 20 minutes too long, Cuba is generally a fascinating (perhaps unreliable) piece of quasi-historical filmmaking. What's perhaps most historically accurate isn't its take on the Castro revolution, but its depiction of American culture's pervasiveness in Cuba. Everywhere Lester's camera turns we see Cubans inundated with Western capitalist ideals: from the grandson of one of the generals playing Monopoly with his grandfather, to the "Mr. Clean" commercial playing on the television set while a seemingly unresponsive elderly woman stares at it, to the General watching a private screening of Horror of Dracula (a British film, but it qualifies as a Western influence nonetheless).

Brooke Adams, ever the photogenic actress, radiates in Cuba. She's a stunning beauty, and her dark hair makes the New York-born actress believably Latina (maybe not Cuban, necessarily) even when her accent falters periodically. The chemistry between Connery and Adams seems off, but there's something oddly fitting about it at the same time: it's a jaded, unworkable romance for the jaded soldier. Alex is spoiled and selfish but also sympathetic. And Dapes is stubborn but not unfeeling.