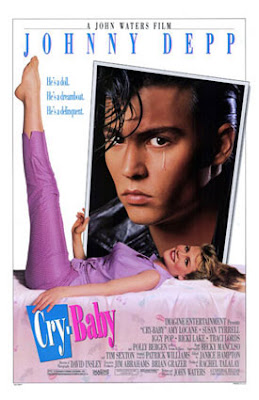 Cry-Baby (1990) is writer-director John Waters' second mainstream movie, and it's a charming, surprisingly good-natured parody of Baltimore in the 1950s. It's about two rival gangs: the Squares and the Drapes. The Squares follow the rules, the Drapes break them, and goody-goody Allison Vernon-Williams (played by Amy Locane), feels caught in the middle. "I'm tired of being good!" she moans. She's pressured by her grandmother (Polly Bergen) to follow a conventional path. (Her grandma runs a sort of adolescent finishing school where she teaches teenagers the tenets of suburban social etiquette and good taste.)

But Allison is in love with Cry-Baby (Johnny Depp), who represents freedom from conventions. (He's eventually arrested and convicted of "juvenile delinquency!", which I didn't realize was an actual charge.) Basically, Cry-Baby is the James Dean of Baltimore. He's loved by the Drapes and despised by the Squares.

Cry-Baby is a musical, but not the kind where a song interrupts the story every five minutes as padding. Its musical numbers are mostly amusing riffs on 1950s culture, mimicking the songs that were popular then (or in some cases reproducing actual 1950s songs; these are generally the ones performed by the Squares' hilariously unhip all-male quartet, which performs at various Baltimore social functions throughout the movie.) I've never responded to 50s nostalgia. Hoop skirts and Elvis aren't my idea of a good time. But in the world of John Waters, even the 1950s can be entertaining.

Johnny Depp's performance is wonderfully sincere yet ironic. He's reminiscent of teen idols Sal Mineo and the afore-mentioned James Dean, but he's also subtly funny. Depp had of course become something of a teen idol himself, thanks to the success of his show 21 Jump Street. So playing the lead in a John Waters movie--even a relatively clean-cut one like this--represents an attempt to move away from that image. I'm not sure it worked, because he's so likable in this film, and he certainly hasn't dimmed as a star in the last 20 years.

The Johnny Depp we get in Cry-Baby is the Johnny Depp I miss. He's not hiding under piles of make-up and a zany wig, or an affected voice, or a character who's completely alien to society. He's a social misfit, to be sure, but he's not pandering to the audience for laughs by being needlessly eccentric. Perhaps he's so appealing to audience members because they find those ostentatious roles (e.g. Willy Wonka, Jack Sparrow) more colorful and therefore more entertaining. But it's become the norm for him to do something commercially weird. (Because, let's not forget, commercially weird is nothing compared to genuine weird, which is why John Waters going semi-commercial was actually a good thing. More on that later.) What has happened in the process of all those oddball commercial roles is the unavoidable plateau: one performance hardly distinguishes itself from another.

Frequently, Waters' movies peter out about sixty minutes in, so I was pleasantly surprised by Cry-Baby, which is perhaps his most sustained movie. Waters was working at his peak, in a sense. He had achieved a little bit of mainstream popularity with Hairspray in 1988 (even though that film wasn't a runaway success), and was given a bigger budget with which to explore his usual theme of social anarchy in the suburbs. But even when his movies run out of steam, they're still a lot more interesting than big, lumbering commercial comedies and musicals. He finds colorful people who aren't all beautiful. He pokes fun at our very conventional discomfort (or is it horror) when we're confronted with the abnormal.

Cry-Baby has a lot of bizarre characters, most of whom are drawn with love, not scorn. Even the stodgy grandmother is redeeming, allowing her granddaughter to choose the man who loves her the most rather than the one who wants to confine her to a life of suburban drabness. The 1980s represented a sort of neo-50s return to the pernicious rot of banality. Those who find that depressing will likely respond to Cry-Baby, a movie which gleefully disrupts suburban mores.