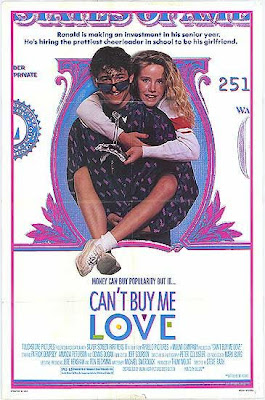 Can't Buy Me Love (1987) is about an unpopular teenage boy named Ronnie Miller (Patrick Dempsey), who pays a popular girl named Cindy Mancini (Amanda Peterson) one thousand dollars to pose as his girlfriend for a month. Of course, a genuine romance gradually forms, but Ronnie changes in the process of becoming accepted by the in-crowd. He gets high on being a somebody, and loses sight of what's really important. This movie shows that the geeks can be as shallow as the popular kids, and the popular kids, like Cindy, can occasionally be mature and selfless. It's a breezy, well-intentioned, but forgettable romantic comedy, and the message of togetherness at the end is a bit hard to take, since Ronnie spends most of the film being a total ass, ignoring his longtime friends and treating Cindy like a pawn in his attempt to climb the high school social ladder.