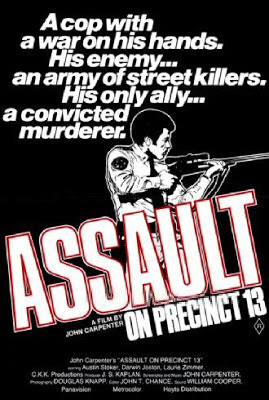 Even thought it's dated now, Assault on Precinct 13 (1976) is still an entertaining piece of action trash, the first critical success and second feature film of writer-director John Carpenter, who drew from Howard Hawks' Western Rio Bravo in telling the story of Assault. It's about a dilapidated, soon-to-be-closed police station (the power is scheduled to be shut off within twenty-four hours) that is besieged by several youth gangs who have joined forces against the police after six of their own were killed by cops.

Assault on Precinct 13 captures the beautiful sunlit Los Angeles by day, as well as the dark, blue-tinted vastness of Los Angeles by night. Or at least, the L.A. that exists solely in our cinematic imagination. Pauline Kael once remarked that Carpenter didn't seem to have a life outside of movies, and you can see that in his work on Assault on Precinct 13. If he's not borrowing from Howard Hawks (even the leading lady, Laurie Zimmer, has a Lauren Bacallishness that reminds you of Hawks' The Big Sleep), he's borrowing from George Romero's Night of the Living Dead. The two films essentially have the same story, except they exist in different genres.

Nevertheless, Assault has an exciting, compulsively watchable efficiency to it. Carpenter enlists the usual help of his synthesizer to make the action sequences pop, and all the visual tricks that eventually became cliches in his work find their impetus in this movie, from the way the creepy monster/villain emerges into frame unexpectedly, to the generally successful use of lighting, and point-of-view camera shots, to provide a tense atmosphere. Carpenter's "look" somehow manages to be almost claustrophobic and yet spatially sprawling enough to generate that creeping sense of isolation that makes thrillers work.

It's got enough violence to sate the exploitation fan, and enough (apparently) intentionally bad dialogue to amuse the lover of movies, both good and bad. Darwin Joston, as the anti-hero, Napoleon Wilson (who's on death row), utters one corny line after another: "I was born out of time," he remarks; and when he's not making mock-philosophical small-talk, he's asking somebody for a cigarette. Austin Stoker does a successful job at carrying the film as just-promoted Lieutenant Ethan Bishop, sent to Precinct 13 to oversee the last-minute preparations before the station is retired for good, never knowing how intense his first night on the job would be. With Tony Burton, Martin West, Nancy Loomis, Charles Cyphers, and Frank Doubleday as a blond gang member who might have been a precursor to Carpenter's unstoppable maniac, Michael Myers. Oh, how I love unknown actors, who always--even when they're not as polished as trained Hollywood actors--provide that valuable sense of normalcy. These could be your neighbors, in your city. It makes the movie that much more fun. A forgettable remake followed in 2005. 90 min. ★★★
by Jacob Lusk @ pannedreview
Email ThisBlogThis!Share to TwitterShare to FacebookShare to Pinterest
Tags 1976, Austin Stoker, Charles Cyphers, Darwin Joston, John Carpenter, Laurie Zimmer, Nancy Loomis, Tony Burton