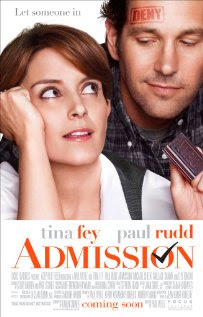 I'm happy to live in a world where Tina Fey is making movies and TV shows, because it's a much funnier, more interesting world than it would be without her. Admission, Fey's latest movie, is that way too: the movie would be less funny and less interesting if she weren't in it. More to the point, it's the kind of romantic comedy that seems tailored to fit Fey's personality--or at least the personality she projects into characters like Liz Lemon, her character from the just-ended sitcom 30 Rock. (I'll refrain from inserting a comment like "30 Rock is the best situational comedy in the last ten years, possibly the last 20.")

Fey plays slight variations of her Liz Lemon character in movies like Baby Mama (2008) and Admission. They're always women who are successful but unhappy. They've avoided the pitfalls of marriage and family only to find another pitfall in their careers. In this latest vehicle, Fey plays Portia Nathan, an admissions officer at Princeton University. (Something about the name 'Portia' seems like an inside joke.) Portia isn't single. She's been living with a Princeton English professor (who thinks that reading lines from Canterbury Tales in Middle English are a good way to spend an evening). She isn't unhappy (she has a rewarding job at one of the most prestigious universities in the world, and she's one of the ones who says "yes" or "no" to a student's application). And she isn't worried about having children. These non-problems only become problems after she meets John (Paul Rudd), a teacher at an experimental school in New Hampshire who's trying to get one of his students into Princeton.

In true romantic comedy fashion, Admission hinges upon a series of unlikely plot devices, such as the teenage boy, who Portia learns might just be the son she had in college and gave up for adoption when he was still a baby. This hypothetical pushes a lot of maternal buttons that Portia didn't know existed in her, and she finds herself doing all of the irrational things parents do to help their children: The very things she's encouraged parents of college applicants not to do.

I really enjoyed Admission. The writing (it was adapted from Jean Hanff Korelitz's novel by Karen Croner) somehow balances clever with commercial, which makes Admission a surprisingly refreshing comedy. It goes in unexpected directions, and requires more from Tina Fey as an actress than her previous movie roles have. She pulls off the dramatic scenes convincingly. But it's her delivery of the jokes that sells this movie. Every one of her throwaway lines seems so fragile, so destined for failure if even one thing is off, be it the timing or the cadence or the facial expression. Yet Fey locates and projects the humor in lines that wouldn't necessarily look funny on the screen. (Except that more likely than not, Croner was familiar with her acting enough to imagine the lines working. This assumes that the movie was written with Tina Fey in mind, of course.)

Lily Tomlin co-stars as Portia's mom. She's an eccentric loner who was a major voice of the feminist movement during the 1970s. She's put a lot of pressure on Portia to be fiercely independent of men, and as Portia treads the ground forged by her mother, she begins to suspect that perhaps it's not as fulfilling as she thought it would be. Tomlin is a delightful comedian, and it's especially fun to see her paired with Fey. Paul Rudd is surprisingly likable in this movie. He's finally been cast in a movie in which he doesn't have to be a jerk, even slightly. He's just charming and even foolishly passionate about the world. It's a refreshing change. With Michael Sheen, Wallace Shawn, Nat Wolff, Travaris Spears, and Gloria Reuben. Directed by Paul Weitz. ★★½
by Jacob Lusk @ pannedreview
Email ThisBlogThis!Share to TwitterShare to FacebookShare to Pinterest
Tags 2013, Lily Tomlin, Michael Sheen, Paul Rudd, Tina Fey, Wallace Shawn

Cool!! We might have to check this one out! Thanks!