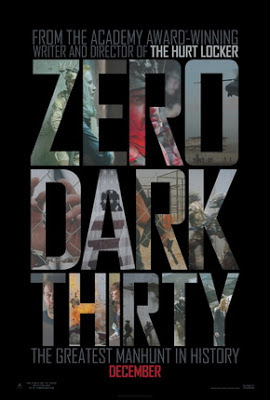 The long, long hunt for Osama bin Laden. If you saw The Hurt Locker, which is the previous collaborative effort from director Kathryn Bigelow and screenwriter Mark Boal, you'll begin to notice a common theme, besides all the obvious commonalities: personal obsession. In The Hurt Locker, Jeremy Renner got off on the thrill of debugging bombs. In Zero Dark Thirty, Jessica Chastain plays Maya, a CIA officer, obsessively dedicated to tracking down and killing the man responsible for 9/11. There's an exchange between her and Defense Secretary Leon Panetta (played by James Gandolfini), where he asks her what else she's done in her career besides search for a ghost of a man. She replies, "nothing." She's driven by the conviction--with monomaniacal devotion and purpose--that bin Laden alone is worth the entirety of her ambitions and focus.

The slow-paced Zero Dark Thirty is a thriller for those of us who are exhausted by thrillers that can't cause enough destruction fast enough. The real world is a frightening place, with or without myriad explosions. In a movie like Zero Dark Thirty, those explosiony scenes are not fodder for thrills, but points of turbulence boiling over, punctuated by the time spent before and after them--not so much leading up to them and responding to them, as making sense of them, and turning the mirror on our own inabilities to truly make sense out of anything in the clash of two incredibly different cultures, both hostile toward each other.

As politically "now" as Zero Dark Thirty is, it doesn't have much of an axe to grind. I heard Bigelow say in an interview with NPR that she wanted the past to be portrayed as accurately as possible, not whitewashed. That said, her latest film doesn't seem to be gunning for anyone. It's not an expose of military practices, or a particular political party, or the country, or any belief system. Rather, it's an attempt to dramatize what has been arguably the most compelling--and drawn-out--historical moment of our time. Of course, viewing a movie like Zero is difficult. We're at both an advantage and a disadvantage when we're staring so close to these events, these very real events. From Here To Eternity, which dramatized the Pearl Harbor attack, was released 12 years after the fact. Zero Dark Thirty comes only a year-and-a-half since the discovery of bin Laden. One wonders how this movie will hold up, factually, as history reveals more information, commuting the present into the past, and shedding new light on the complex agendas waging war with each other.

This is a movie that compellingly gins up our emotions. We're rooting for the military, still stinging from a horrifying event. And yet one cannot help but wonder at the deep divides between the West and other parts of the world. Despite the "happy ending," there's not really a happy ending. And Zero Dark Thirty succeeds in pressing this idea into the mind. It's a hollow victory, if anything.

Loved this film! It has caused a bit of controversy, though, over the torture implications at the beginning. I'm glad to come across your blog.

I think I admire ZDT's ambiguous stance on torture. I appreciate how much the movie didn't seem bent on making an overt political statement.

But whether or not the movie fails to be clearly opposed to torture, it certainly made me see more clearly how horrible a practice it really is.