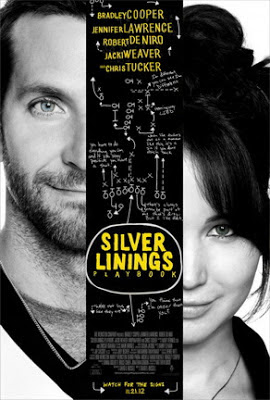 Does anyone remember that whole sub-genre of movies about the normal guy meeting the kooky girl who changed his life by encouraging him to live life to the fullest? Goldie Hawn did a couple of those kooky girl movies, and Geena Davis won an Oscar for play one of them in The Accidental Tourist. Well, writer-director David O. Russell's Silver Linings Playbook is sort of like those movies, if both the guy and the girl were playing kooky characters.

(Take note of some very mild spoilers in this paragraph.) Bradley Cooper plays the lead, a former teacher named Patrick, who at the beginning of the movie is getting released from a mental institute after spending eight months in court-ordered therapy. Patrick was sent there because of a violent outburst involving his wife and another man. Now he's been diagnosed with Bipolar disorder, but refuses to take his medicine because it makes him foggy, and bloated. He finds a fellow misfit in Tiffany (played by Jennifer Lawrence), a very young widow whose husband died during an act of Good Samaritan-ship.

Patrick is living with his parents (Robert De Niro and Jacki Weaver) in his Philadelphia hometown, trying to improve himself so his wife Nikki will take him back. He's deluded himself into believing she will take him back, and experiences moments of paranoia and rage. (For example, he freaks out any time he happens to hear the song that was played at their wedding.) Tiffany turns out to be the best thing for Patrick: she goads him into pairing up with her for a dance competition (in exchange for which she will pass along a letter from Patrick to Nikki, as Nikki currently has a restraining order against him). Their off-kilter relationship works, for them, and for the movie. Yes, Silver Linings Playbook stops short of being original. It resurrects too many staples of the formulaic romantic comedy, such as the character's carefully-contrived weaknesses coming back at the end to throw a little doubt on the outcome of the dance competition, or the dance competition itself, which seems like a pretty standard conflict for a movie like this.

But what makes Silver Linings Playbook stand out is the performances of its cast. Cooper, who I must admit tends to get on my nerves, is believable and sympathetic in this movie. Jennifer Lawrence, who everyone knows is extremely talented, does a fine job in this movie. It's one of the few strong female roles I've seen this year, in fact. De Niro and Weaver work well together as the parents, well-meaning but a but clueless as to how they can help their son's mental health issues.

There's one major flaw. In several scenes, the characters start screaming at each other at the top of their lungs. Russell should have put a stop to this. It doesn't work. It turns up the viciousness and quickly, transgressively, enters into the real of histrionics. Fortunately, there's a sharp sense of humor that generally saves the day. It's another good, not great movie.