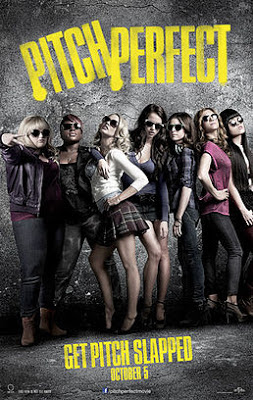 Cashing in on the Glee-mania (perhaps already too late), Pitch Perfect is a loving send-up of Acapella music and all those formulaic competition movies. (Isn't really just Sister Act with teenagers?) It's about a girl named Beca (Anna Kendrick), who's forced into college by her English professor dad, even though she just wants to go to L.A. and become a music producer. Beca unwillingly joins a girl's singing group called the Barden Bellas (the school is called Barden University). The girls have problems winning at all the big competitions, namely their Type-A self-appointed leader, Aubrey (Anna Camp), who refuses to allow input from the other girls, especially Beca. So you know, they eventually confront this problem and wow everyone at the big final competition.

The best thing you can hope for in any formula movie is a little novelty. The plot of Pitch Perfect sticks to its safety net with relative consistency, making it amusing fodder if you haven't seen this kind of thing a thousand times already. What Pitch Perfect lacks in originality, it makes up for in sheer quantity of engaging performers: Kendrick is mousy and a little too perfect to convince us that she's a music-producer-superstar in the making, but she's plucky and engaging. She'll do, since Emma Stone either can't sing or wasn't available to do the movie; Rebel Wilson, as Fat Amy, the girl in the group with no verbal filter, makes off with every scene like a bandit; Brittany Snow as Chloe, the offbeat but deferential co-leader of the group; Adam DeVine (of TV's Workaholics) as the obnoxious, egotistic frontman of the rival glee club; and Skylar Astin as Beca's love interest, who happens to have a beautiful singing voice himself. He introduces her to movies like The Breakfast Club (because it's now law that all teen comedies refer back to older teen comedies).

It's likable but overrated. I remember being swept up during the big number in Sister Act (the one where Whoopi leads the nuns in a rock-n-roll-ish update of an old Catholic hymn and brings down the house.) Music is powerful, as the popularity of all these movies and shows can attest. The songs--performed with such aplomb and vigor--are exciting. Those are the best moments of Pitch Perfect, not to mention the occasional throwaway lines. It has a good sense of humor. I just wish the plot itself had been a little tighter.

Elizabeth Banks and John Michael Higgins are wonderful as the two commentators on the competitions. They're ex-gleeks themselves, and their banter is hilarious. Good hams are better than bad actors any day. Written by Kay Cannon. Directed by Jason Moore. With John Benjamin Hickey, Alexis Knapp, Ester Dean, Hana Mae, Ben Platt, and Christopher Mintz-Plasse. 112 min. ★★½