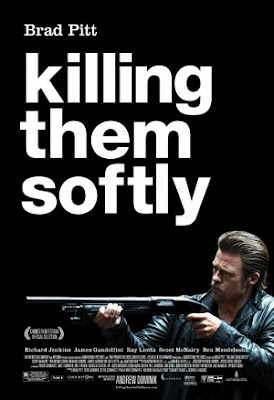 Killing Them Softly feels gloomy and vacant, humorless. It's a hollow crime drama. I suppose that's an appropriately realistic way for a crime drama to be. But I was wanting something more fun. Brad Pitt is a talented actor when he's given the right material. He's not bad here, and yet he's not entirely right for this role. His character, an apparently talented hitman who doesn't like to put his victims through any emotional or physical torment, preferring instead a quick and painless assassination, is uninteresting. He's not flashy or cool in the way a Brad Pitt character needs to be to make him truly come alive as a performer. His name is Jackie Cogan (the source material, by author George V. Higgins, is the novel Cogan's Trade), and his services are enlisted by a bunch of mobster-looking corporate guys who were robbed during a poker game.

The perpetrators of this robbery are two ne'er-do-well types: a drugged out Aussie named Russell (Ben Mendelsohn) and a chatty career criminal named Frankie (Scoot McNairy). They don't have much finesse when it comes to holding people up, but they manage to pull off the job anyway. There's a bit of a hole in the plot: the sort of 'master-of-ceremonies' of the poker game, played by Ray Liotta, had already gotten away with robbing the game several years back. He eventually admitted this, and by then was laughed at, good-naturedly, and tentatively forgiven. Knowing that he would be blamed for any subsequent robberies, the two hoods feel confident they can get away with it scott-free. The fact that Liotta wasn't rubbed out after his admission seems like a weak point in the script, and the entire movie hinges on it, loosely.

Not only does the film seem to rest on a fuzzy, poorly worked out detail, but it's relentlessly talkative, and not in the Quentin Tarantino isn't-it-great-how-clever-the-script-is kind of way. Mostly it's a bunch of scenes of has-been criminals hashing out the details of how they're planning to perform an upcoming job, but revealing more about their own insecurities and failings in the process. It's a bit like seeing someone's father cry. And the talkiness feels like padding, not entertainment.

There's some artfulness to director Andrew Dominik's imagining of all this. (Take note of a spoiler here.) He turns one scene--in which Pitt shoots Liotta while he's at a red light--into an almost scientific display of the bullet exiting the gun, torpedoing through the window glass, through Liotta's hand raised in self-defense, into his face and out the back (all in slow motion, of course). But that's not really impressive. It's just a little better than having to sit through another brutal killing scene. (Liotta already figures in a particularly unwatchable sequence where two hired men beat the hell out of him. It's quite distasteful to look at it.)

There's an obvious political agenda in Killing Them Softly that doesn't quite take. Throughout the movie, anywhere there's a radio or a television, we hear or see clips of President Bush and President-Elect Obama (the movie is set at the end of 2008) talking about the financial crisis. Is this some kind of ironic explanation of the motivations of hit men? Apparently it's an indictment of American morality, as Pitt confirms in his rant at the end of the movie, closing the film out with an admittedly funny line: "America's not a country. It's just a business. Now f***ing pay me."