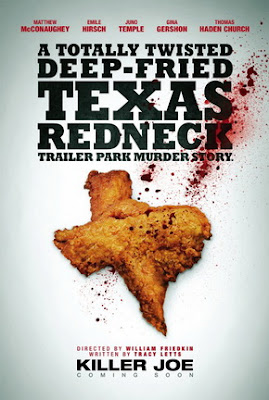 I don't think I've ever seen a movie as perverse or twisted as Killer Joe. The story, which is set in Texas, involves the unkempt Smith family: 20-something son Chris (Emile Hirsch), his no-good father Ansel (Thomas Haden Church), Ansel's second wife, Sharla (Gina Gershon), and Chris's younger sister, Dottie (Juno Temple). The Smiths concoct a little scheme to have Chris and Dottie's real mom murdered, so they can collect her insurance policy (of which Dottie is the supposed beneficiary). They hire Joe Cooper (Matthew McConaughey), a detective who works as a freelance hit man, to do the job. Of course, there's a problem. Chris didn't check his facts well enough, and it turns out his sister is not the beneficiary of their mom's insurance policy.

The director, William Friedkin, has a track record for putting his audiences through hellish experiences (legend has it that some theater-goers apparently left The Exorcist in states of shock). Like many of Friedkin's other films, Killer Joe has a certain trashy appeal to it. It presents the trailer park family as a circus sideshow: There's something horribly fascinating about their disloyalty to themselves and each other, their greed, and their sheer stupidity. What's beyond fascinating--and downright horrible-- is the ease with which they allow Dottie to be used as a sex object to temporarily sate the desires of the beast they've invited into their dysfunctional nest. Indeed, this movie shows us a family of demons trying to best a devil, forgetting their that own ineptitude--and his masterful cunning--will give them away. Killer Joe is sort of a combination of The Texas Chain Saw Massacre and Blue Velvet. McConaughey appeared in one of the Chainsaw movies, as a maniacal killer. He exercises a lot more control here, but again emphasizes the sleazy, creepy aspects of his personality.

Killer Joe is entertaining up to a point, but the finale is subtly brutal--and then perversely brutal. The feelings of pleasure that we get from most thrillers can so easily be turned into dread and disgust, and Friedkin has no problem ratcheting things up to assist that progression. One wonders how bad it must have been for the actors, who are so abused, both physically and psychologically, throughout this movie. Nevertheless, everything about Killer Joe is done well. It's first-rate technically, sharply acted, darkly funny, surprising, suspenseful. It seems like the kind of movie that could only take place in Texas. (Even though that isn't true.)

Written by Tracy Letts, from his novel. In case it wasn't clear, this movie is absolutely not for children in any context. 102 min. ★★★
by Jacob Lusk @ pannedreview
Email ThisBlogThis!Share to TwitterShare to FacebookShare to Pinterest
Tags 2012, Emile Hirsch, Gina Gershon, Juno Temple, Matthew McConaughey, Thomas Haden Church, William Friedkin