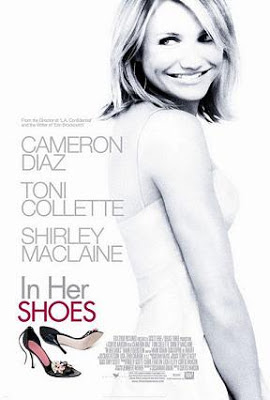 This is how "chick flicks" ought to be made all the time. In Her Shoes (2005) isn't a perfect film, but it's a satisfying film, anchored by the performances of three wonderful actresses, all with their own instantly recognizable charms: Shirley MacLaine as the grandmother, and Cameron Diaz and Toni Collette as her two grown-up granddaughters, both living in Philadelphia, and both unaware that their grandmother, now stationed at a thriving retirement community in South Florida, is even alive.

The sisters are close geographically, but their relationship is strained: Rose is the successful corporate lawyer, married to her job, voluntarily frigidized by her perceived lack of appeal to men, and Maggie is the terminally down-on-her-luck younger sibling, who uses her good looks to get what she wants. Rose, whether she likes to admit it or not, derives a feeling of superiority--an ego-boost--from Maggie's perpetual ineptitude and from always having to bail her out. But Maggie's unreliability soon morphs into real betrayal, severing the sisters' relationship seemingly for good. Maggie finds out about their out-of-touch grandma, and out of desperation retreats to her geriatric sanctuary.

What is surprising to learn about In Her Shoes is that Curtis Hanson (L.A. Confidential), directed it. Hanson's body of work, if you look through it, is relatively obscure until the 90s when he had success with the ridiculous nanny-gone-nuts melodrama The Hand That Rocks the Cradle (1992). Hanson had a field day with L.A. Confidential, which provides more proof that a commercial director can produce a masterpiece when he's given the right script and the right actors. In Her Shoes isn't a masterpiece, exactly, but as a representative of its much maligned genres (they are really two distinct entities)--the romantic comedy and the chick flick--it's a good example of how sentimental, feel-good entertainment can be turned into something elegant and character-driven.

The screenplay, by Susannah Grant (who also scripted the immensely entertaining Erin Brockovich) is adapted from Jennifer Weiner's novel. Grant's script is self-indulgent, but in that inevitable, pleasing way that makes the movie appealing, even if some of it is a bit too much (like Cameron's reading disability, which is handled with as much finesse as you could expect from such a Lifetime-movie-esque plot device). The script is also very funny, and the humor elevates the darker moments of the movie. Perhaps it's grasping at too much by trying to be an honest look at two complex women and their relationship, while also trying to be a feel-good chick movie, but it pulls both off with a lot more charm and appeal than most movies accomplish with just one of those balls to juggle. And the jokes are well-chosen and well-placed: They don't saturate the movie. They run pop up at unpredictable moments, and are brought to life with delicious zeal from the appealing cast.

As for the actors, MacLaine has perhaps never been more restrained, and she's so regal, so powerful in that restraint. You want her to be your grandmother, because she's loving but also because she's interesting, tough, sharp, and wise in a quiet, pensive way, like she's always aware of the next five moves in the Chess game. Or maybe the entire game, right from the start. Cameron Diaz, who's a really charming actress when given the right part, thrives in this movie, especially against the dramatic chops of Toni Collette. Both women breathe a stunning array of depth into their characters.