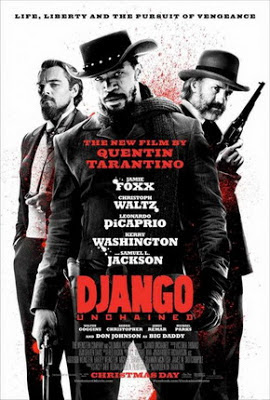 There's something unsettling about Quentin Tarantino's project of providing wish fulfillment revenge fantasies, first to the Jewish people in Inglourious Basterds, then to the American slaves, in Django Unchained. Watching one of Tarantino's films almost always gives me the impression that this director is full of himself, because his movies are so audacious. But it's hard to be too concerned with these thoughts, because Tarantino's movies are generally so much fun to watch. (Jackie Brown remains my favorite.)

The plot of Django Unchained is this: a German bounty hunter named Dr. King Schultz, played by Christopher Waltz (who was so deliciously evil in Inglourious Basterds that you can't help but wonder if he's going to turn bad in this one too) enlists the help of a slave named Django (silent 'D'), played by Jamie Foxx, to find three white men who are wanted for murder. Dr. Schultz works for the government, and is legally permitted to kill any of his targets as long as he produces their bodies. Django worked on a plantation under these men, who once beat his wife ferociously after she and Django tried to escape. Eventually Dr. Schultz and Django form a partnership, after Schultz gives Django his freedom, and they decide to rescue Django's wife, now working a plantation in Mississippi.

This plantation in Mississippi is run by Calvin Candie, and it's called Candieland. The name itself suggests the genteel, gruesome horrors of slavery. When we finally get to Candieland, where we know the film will play itself out in full faux-Shakespearean fashion (Tarantino is maybe the comic book Shakespeare of our time), it's the most terrifying visual in the movie: the cotton jutting out of the fields like white dollops of foam; the slaves working in the punishing Mississippi sun; and Leonardo DiCaprio, never more villainous and enjoyable in his entire career, as Calvin, the Southern gentleman with a murderous temper, who gets his kicks watching black men fight each other to the death.

Django Unchained is the most suggestively violent of the Tarantino movies. The director holds back here more than usual, presumably to demonstrate a little good taste. He's already walking on egg shells by making a movie that tries to retroactively punish white racism, and if you can allow yourself to enjoy its maniacal plot, you're likely to have a good time. The camera, more often than not, looks away from the violent acts, or at least, the most violent parts of them. The suggestion is powerful enough. There's the expected bloodbath, near the end. That's the cookie, the reward for the initiated, who perhaps sit through Tarantino's talky, long-winded plots just for those ten minutes of gory violence. But as much as I was filled with anticipation and suspense for that scene to come, the rest of the movie is what's more enjoyable (although the long-windedness takes a toll: they could have shortened it a bit, I think.)

The performances in Django Unchained are the film's strongest assets: Jamie Foxx turns into some kind of 1850's blaxplitation superhero. His performance is smooth and assured, and his indignation both righteous and horrific. Waltz is a charming participant, perhaps incredulously caught up in the story, but like any good bad movie, necessarily out of place. He's a wonderfully engaging actor, and all the scenes where he talks his way out of being shot by various farmowners and sheriffs and villains, are deliriously funny and amusing. DiCaprio is wickedly good, playing a part that's truly distinguishable from so many of the banal-important roles he's played before. He's colorful, capturing that weird mixture of Southern gentleman-Gothic torturer.

The South, like every other place figured into a Quentin Tarantino film, becomes the director's playground, where he employs any and every ingredient that interests him. Thus we get a movie set in pre-Civil War America full of 20th century Westerny songs as background music (and a few rap songs, too). The anachronism works well for this kind of pop-history-carnival ride. It's not a perfect film, and it's not the director's best film, but it's a fun movie, and I'm always grateful when movies aren't afraid of showing us a good time.

With Kerry Washington (as Broomhilda--Tarantino must have been waiting 20 years to use that name), Samuel L. Jackson (perhaps the most hated character in the movie, as the self-loathing head-slave, and Mr. Candie's right-hand-yes-man), Walton Goggins, Don Johnson, Laura Cayouette, Dennis Christopher, James Russo, James Remar, Tom Wopat, Cooper Huckabee, M.C. Gainey, Bruce Dern, Ned Bellamy, Jonah Hill (who has a cameo in one of the funniest scenes: a pre-KKK nighttime attack that isn't very well-thought-out by the participants), Tom Savini, Robert Carradine, Michael Parks, and Quentin Tarantino. Written by the director. 165 min. ★★★½