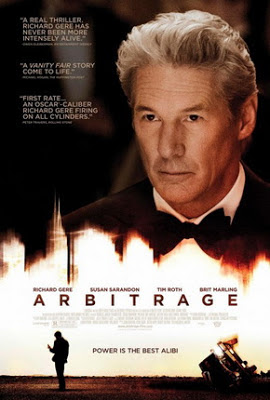 More terrifying than King Kong, Jaws, or the apocalypse, the Corporation has become the cinema villain/monster par excellence. This is apropos in our current age of corporate executives turning money into more money in mere seconds, and wiping out the life savings of entire companies with fraudulent business practices. Arbitrage, like last year's superior Margin Call, examines a billionaire (Richard Gere) whose irresponsible, arrogant, greedy behavior threatens his company and all who work for it. But he's nothing if not a sly businessman, so when his hedge fund is threatened with exposure, he decides to sell his massive company in time to avoid public embarrassment or any financial ruin. Gere is perfectly suited to this role: he's got the look of a wearied executive down, spinning all kinds of falsities about working for his family, when it's really his own success, the addiction he has to making more money, that drives him.

When his hush-hush lover, a failed French artist, dies in a car accident in the middle of the night because Gere fell asleep at the wheel, he's finally faced with a genuinely sticky situation, and Arbitrage is about how he tires to get himself out from under it. It's not a brilliant movie, but there's something brilliantly corrupt that it shows us about human beings, about American culture, about our entire value system.

What's so refreshing about Arbitrage is that it doesn't go for the obvious, but the inevitable. The people in this world are the recipients of a moral decay that's far more glamorous than the things we see on the news--the horrific shootings and the drug trafficking and the human trafficking, that we all deplore with such moral certitude. The moral decay of Arbitrage is one where negotiations extend beyond the conference room and into the bedroom, where money drives every motivation, and even marriage runs on the concept of mutual interests. There's a decidedly Victorian sense of patriarchal faux-benevolence that keeps all the players in place. The finale is so wonderfully fitting that it makes up for the fact that at times Arbitrage feels like an episode of Law and Order mixed with Wall Street. It's not a great movie, but a pretty good one, and a frighteningly apt comment on human character.

The supporting cast includes Susan Sarandon (who doesn't get to shine the way I wanted her to, until near the end) as Gere's wife, Tim Roth as a detective, Brit Marling as Gere's daughter, an executive herself who still sees the business world as a place inhabited by honest people with clean motives, Nate Parker (who delivers the film's most sympathetic performance) as a down-on-his-luck kid (whose father once worked for Gere) who comes to Gere's rescue, Laetitia Casta as Gere's girl-on-the-side, Stuart Margolin, Chris Eigeman, Graydon Carter, and Bruce Altman. Written and directed by Nicholas Jarecki. 105 min. ★★★
by Jacob Lusk @ pannedreview
Email ThisBlogThis!Share to TwitterShare to FacebookShare to Pinterest
Tags 2012, Brit Marling, Chris Eigeman, Nate Parker, Nicholas Jarecki, Richard Gere, Stuart Margolin, Susan Sarandon, Tim Roth