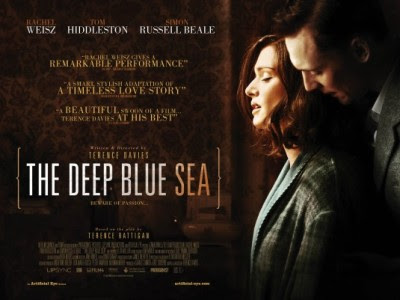 Originally, The Deep Blue Sea was a play by the English writer Terence Ratigan. It was first adapted to the screen in 1955, with Vivien Leigh in the lead role of Hester, the woman whose feelings about love and desire are too complex for her to put into words. Now Hester is played by Rachel Weisz, whose performance is heartfelt and passionate, even if the movie is a dismal affair. It's all very English, and very grimly heart-wrenching, yet there's a sort of subdued wistfulness about it that keeps it from being histrionic.

When Hester falls in love with a dashing war veteran (the movie is set in London in 1950), she leaves her well-to-do husband William (Simon Russell Beale), a successful judge who's still far too attached to his stultifyingly correct mother (Barbara Jefford). There's a deliciously acidic exchange between Hester and her mother-in-law early in the film, when they're having dinner together with William. The mother-in-law, intent on unmasking Hester's unfitness for her darling son, asks Hester if she plays sports. Hester replies that she's never been very passionate about sports, and then the mother, with sheer, venomous perfection, says, "Beware of passion. It always leads to something ugly...A guarded enthusiasm is much safer." What a wonderful line! And a wonderful exchange.

It would seem that Mum's words were indeed prophetic. Hester's relationship with her new lover, Freddie (he's played by Tom Hiddleston), dissolves almost as quickly as it begins. Strangely enough, her encounters with her husband, who was initially (and understandably) furious with her for having an affair, become more civilized. He seems genuinely concerned about her well-being. But it's never clear if this concern is merely a ruse to win her back. The scandal of an unfaithful wife is bad enough, let alone the shame of a divorce.

This is the kind of film that would have been a lot more earth-shattering in the 1950s. And indeed, the play was, upon its initial debut in 1952, considered an important commentary on the state of relationships between people, post-war. We like to imagine that things (society, people, relationships) had become far more complex. (Were they ever not?) And this piece of British domestic discord is a sort of civilized descent into a private British hell: the hell reserved for the overly passionate. (Perhaps this is the ultimate English fear. I think the mother must have seen it all coming well before even the girl did.)

The movie left me feeling numb. There's nothing new here, nothing being said that hasn't been said before. The question lingers: why did the director, Terence Davies (who adapted the play, presumably so that it would be less stagy), feel so compelled to make this movie now? Perhaps it's a reminder that sixty years of time and progress and technological achievement haven't ceased to clarify much of anything. And perhaps nothing new needs to be said, as the old problems continue to require reflection. The Deep Blue Sea reminds us of the limits of language, and the seemingly inexhaustible depths to which humans will go to hold onto something--or someone--they love, even in the midst of great pain and turmoil.

Probably the most memorable sequence is Hester's flashback of London during the war. Her mind drifts back to that powerful, frightening memory: hiding inside the relative safety of the train station during the London air raids. A man's voice sings the Irish folk song "Molly Malone." It's a lovely, heartbreaking moment. As I reflect on this film, it strikes me that we don't have movies of this kind often enough. The Deep Blue Sea will likely be ignored by the big awards-purveyors because it's not commercial. It doesn't have the slickness we've come to expect in movies today. That's probably why I felt a little bored during it. But we need to applaud filmmakers and actors who take on projects like this: projects that seek to explore the things for which we fail to explain in words; the things which often defy logic. ★★★
by Jacob Lusk @ pannedreview
Email ThisBlogThis!Share to TwitterShare to FacebookShare to Pinterest
Tags 2012, Rachel Weisz, Terence Davies, Tom Hiddleston