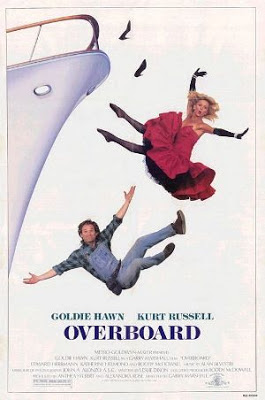 I grew up on Goldie Hawn. Overboard (1987) isn't one of her strongest vehicles, but her performance is enjoyable nonetheless. She plays a spoiled millionaire who hires a carpenter (Goldie's real-life significant other, Kurt Russell) to remodel the bedroom closet on her yacht while the boat is docked on the coast of Oregon, awaiting engine repairs. Unhappy with the local carpenter's final product, she pushes him off the boat and into the sea. Later that night, she falls into the ocean herself (unbeknownst to her husband or any of the crew), losing her memory in the process. She's eventually picked up by another boat and taken into town for medical treatment. But when her husband decides not to claim her (she's too much of a bitch even for him), the carpenter sees an opportunity for revenge. He pretends to be her husband, and takes her home to his ramshackle house and four unruly sons, turning her into the homemaker she never was.

You will enjoy Overboard more if you can ignore some of the gaping holes in the plot. (How did he convince the hospital staff he was her husband without a shred of documentary proof?) Goldie's transformation from a bored, boring, bossy snob to a person who actually knows a hard day's work, is fun to watch, especially because she does it with such charm, and she and Kurt Russell have such chemistry.

The movie is overly sentimental and lacks any kind of dependable smartness. It's funniest when the actors have little one-liners, delivered almost under their breath, showing you that the writer, Leslie Dixon, and the director, Garry Marshall, are capable of more than formula movies when given the right material, the right ideas, and the right stars. The stars are right, but the ideas aren't clever enough to make Overboard a complete success as a comedy, even though it is funny. (It's certainly not as embarrassing as it could have been; but it's also not as intelligent or as inventive either.) Most of those 80s comedies I grew up on work because of the performances, not because of the writing or the plot. It's when you remove your focus from the acting and pay attention to the silly, obvious plot that you start finding things to quibble with.