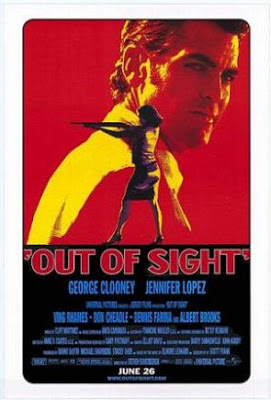 Out of Sight (1998) is a crime comedy that's intermittently clever and dumb. It's got George Clooney, though, as a bank robber who's tired of prison and ready to retire, if he can make a final score that's large enough to sustain him. Director Steven Soderbergh demonstrates his ability to make fun movies here: it's sort of a breezier, less show-offy version of a Tarantino movie, with an interest in developing a relatively straightforward --but layered-- story, rather than twisting it like a pretzel. I'm not so much criticizing Tarantino's movies as noting the difference between this film and say, Jackie Brown (both movies, incidentally, come from novels by Elmore Leonard). Out of Sight is content to be entertaining without being overly clever. Soderbergh is a more conventional director than Tarantino, you might say. He knows how to transcend conventional movies and turn them into something fun and unique, and that's largely what he does with Out of Sight. It has so many funny, quirky moments that are fresh and interesting, and yet it never feels like something so disdainfully self-aware as a Tarantino film.

There are moments when you wonder if the screenwriter, Scott Frank, wasn't paying attention to his material closely enough. He lets characters do things that seem illogical, even stupid, for the sake of advancing the plot in a certain direction. The movie is almost gleefully disinterested in being realistic. You admire its casualness. Clooney has that sort of casual charm to him, and he's perfect for this movie. Jennifer Lopez, as the marshal who falls in love with him, isn't a great actress, but she does have a sense of comic timing, and she's a great beauty too. Her character downplays her obsession with "bad guys," even though she must know she's lying to herself the way the movie is lying to itself, playfully. This heist-farce was made purely for entertainment. But it has enough smarts not to be totally mindless, too.

The supporting cast is a dream: Ving Rhames as Clooney's partner in crime, a tough, weathered criminal who nevertheless confesses his crimes--sometimes prior to committing them--to his ultra-religious sister, a bookkeeper for a televangelist; Don Cheadle as a fellow criminal, who agrees to join forces with Clooney and Rhames to break into the safe of a Detroit millionaire, played by Albert Brooks, who did time with them in Florida (presumably for embezzlement); Dennis Farina as Lopez's father, also in the business; Catherine Keener as one of Clooney's friends in the outside world: a former magician's assistant. She figures in a very amusing scene in which an escaped criminal, played by Luis Guzman, comes to her door to kill her, unaware that Lopez is already there questioning her about Clooney's whereabouts. Keener is another actress with a remarkable comic sensibility: she's subtle, too, never forcing herself on the camera or the audience. She lets her character's intelligence sink in gradually; Steve Zahn plays a moronic stoner who comes to Clooney's assistance (sort of), half-heartedly, and gives away more than he realizes whenever he encounters Lopez, who knows how to work him; Viola Davis as Cheadle's girlfriend; Michael Keaton as Lopez's married lover, an FBI agent who has a great scene with Farina in which he sneakily calls him out on his behavior; Nancy Allen, as Brooks' girlfriend; and, in a cameo appearance at the end, Samuel L. Jackson, as another convict.
by Jacob Lusk @ pannedreview
Email ThisBlogThis!Share to TwitterShare to FacebookShare to Pinterest
Tags 1998, Catherine Keener, Dennis Farina, Don Cheadle, George Clooney, Jennifer Lopez, Michael Keaton, Nancy Allen, Samuel L. Jackson, Steve Zahn, Steven Soderbergh, Ving Rhames, Viola Davis