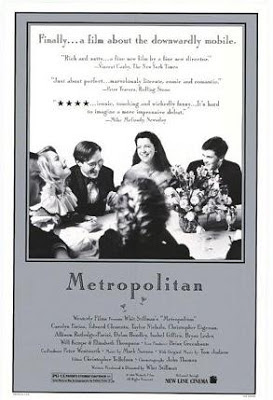 In Metropolitan (1990), Tom Townsend, who's just finished his first semester at Princeton, unexpectedly enters into the inner-circle of a group of upper-class New York college students during debutante season. It's like a preppie Breakfast Club only everyone's too intellectual to wallow in self-pity. Most of the action takes place in one of the adolescent's homes, where the group stays up late into the night drinking, talking, and occasionally playing Bridge or some other game. They're socialites in training. It would be pretentious if it wasn't so funny and so earnest.

The writer-director Whit Stillman pulls off something impressive: he creates a believable, sympathetic, even inviting, world comprised of somewhat stuck-up, educated young people who are endearing in spite of themselves. They talk about philosophy and economics but they also gossip, and they're acutely aware of their social world. They're also naive, but in their precocious over-analyzing they manage to find at least some degree of acceptance that, though they think they know everything, they may also be wrong about some things.

The performances by the fresh-faced cast are mostly good. This is an extremely talky movie, one that almost plays like a filmed stage production. It's a movie about ideas and social relationships, and while Stillman isn't totally ignorant of or indifferent to the cinematic elements of his movie, he's far more attuned to the dialogic aspects. We're immersed in this inner-circle like a fly on the wall as the social dramas play out: the scathing remarks, the incisive criticisms, the hopeful longings for romance and success, the cynical worries of the future: it's all wrapped up in a peculiar fabric of conversation. You're never even sure how much these people like each other.

At times they seem to have cut each other to pieces, and then moments later it's as though nothing's happened, and they're chasing after some other thread of conversation. It's a fascinating movie; not perfect, but never boring, and totally unpredictable. I was charmed by it in a way I haven't been in a long time.

The cast includes: Edward Clements as Tom, the newcomer who has a lot of "big" ideas about economics, culture, and philosophy, but is also still a little gauche when it comes to girls; Carolyn Farina as Audrey, the bookish girl who's never really been in love before; Chris Eigeman (a stand-out performance), as Nick, the guy who pisses everyone off with his cynical honesty and harsh criticisms of one and all, but is also somehow likable in spite of himself; Taylor Nichols (who made me think of Crispin Glover) as Charlie, the nerdy ideologue who's in love with Audrey but can't get up the nerve to tell her, and resents Tom because Audrey has a crush on him; and Allison Parisi (who, with her raven-like hair and confident, imposing features resembles a young Kirstie Alley), the most "grown-up" acting of the girls; she exudes maternal qualities but is indifferent toward the other girls at the same time. Also starring: Isabel Gillies, Bryan Leder, Will Kempe, and Ellia Thompson. The film was nominated for an Academy Award for Best Original Screenplay. 98 min. ★★★½
by Jacob Lusk @ pannedreview
Email ThisBlogThis!Share to TwitterShare to FacebookShare to Pinterest
Tags 1990, Allison Parisi, Carolyn Farina, Chris Eigeman, Edward Clements, Whit Stillman