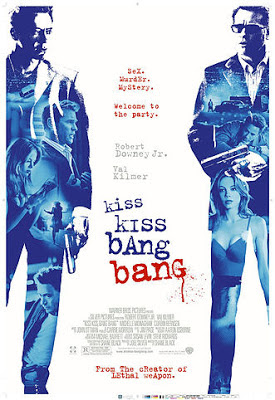 Kiss Kiss Bang Bang (2005) is a movie that tries too hard to be clever. The script, by director Shane Black, is hack work trying to pass itself off as hip, post-modern, meta-noir. That's a lofty goal, considering this is supposed to be a tribute to pulpy crime novels and film noir. It's too carefully self-aware to work. (Black borrowed the title from a 1966 Italian spy movie, as did film critic Pauline Kael, for her second book of movie criticism. Kael observed that those words aptly described the appeal of movies, in a nutshell.)

It's not that Kiss Kiss Bang Bang doesn't have appeal. Robert Downey, Jr. and Val Kilmer are both fun performers, and they're well-paired: Downey plays an up-and-coming actor who's shadowing Kilmer, a gay private eye, so he can be better prepared for a movie role. Downey also narrates, and periodically his narration makes little ironic commentary that's supposed to make light of bad or unclear plot progressions. But instead it just feels like the work of an amateur. And the over-complicated plot, which is supposed to be an homage, feels thoroughly disengaging and disconcertingly practical. Every action seems to be a vehicle for a bad joke. (There's even a character whose name is Flicka, purely so someone can reference her as "my friend Flicka." If that's Shane Black's idea of being clever, I'm out.)