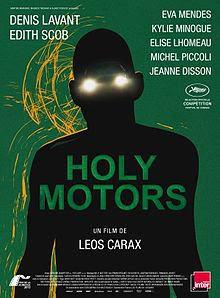 Holy Motors is one of those movies that we're supposed to embrace because of its allegedly bold, ambitious attempt to eschew the traditional narrative approach to film. And who are we kidding? Narrative is so passe. The director, Leos Carax, paints us a picture of a man named Oscar (Denis Lavant) who is sort of an actor. He travels to various "appointments" in a white stretch limo, transforming himself into unique "characters" inside the limo, which functions as a makeshift dressing room.

In one such appointment, he dons yellow, ghastly-looking fingernails, stringy red hair, and an ugly green suit, and becomes a shambling, semi-mentally-retarded troll. He wanders through an old cemetery and into a photo shoot, kidnaps the model (played by Eva Mendes), who doesn't appear to be lucid, and takes her to his lair where he eats some of her hair and then strips naked, revealing a full-on erection. That was the point when I realized I had wasted my "WTF" facial expression on Cosmopolis.

Holy Motors is the kind of film that people watch and say, "yes, those Europeans don't need logical plots. How sophisticated they are!" I think it's safe to say that not all Europeans will like Holy Motors. These kinds of films reveal a lot about Americans, particularly our ever-present fear of being considered less cultured than our forebears in Europe. I hope people who see Holy Motors for what it is will not be branded as unsophisticated narrative-junkies who curl up in the fetal position--screaming with moronic fury-- when the plot of a film isn't totally linear. At the same time, I realize it's foolish to want to lay down any hard-and-fast rules about what makes a good movie good (such as "a film's plot must be linear"). Those rules are always broken sooner or later, and the critics who nailed them onto the doors of the theater are soon yanking them off again--quietly, hoping nobody will hear them.

Edith Scob's performance as Oscar's driver, Celine, stands out as one of the few highlights of the film. She's not the type of person you imagine being a driver. (They're usually men, for some reason.) Her devotion to Oscar is unyielding, almost doting, but strictly professional, mostly. (She lets down her guard at the end, and it's kind of touching.) Kylie Minogue has an interesting scene near the end as Jean, a fellow actor who Oscar meets unexpectedly when their limos bump into each other. In one of the most bizarre scenes in the film (which must be some kind of an accomplishment), they wander through an abandoned department store, the ground of which is littered with dismembered mannequins, and Jean breaks into song, letting out vague but passionate clues about hers and Oscar's romantic past.

There are movies that are strange and unusual and complicated and wonderful. This just isn't one of them. The outre subject matter in Carax's film feels amiss, boring, meaningless, at times funny, confusing, yet obvious. It's a sort of faux mock-cleverness that's unaware of how insipid it is. For example: the model who allows herself to be kidnapped by Levant as the troll. She's blase during the entire scene, and the photographer allows her to be kidnapped. So we're never sure who is in on the act and who's not. But these motivations do not matter because the movie isn't that interesting. It's a spectacle with no meaning behind it. Perhaps some people will find it beautiful to look at.