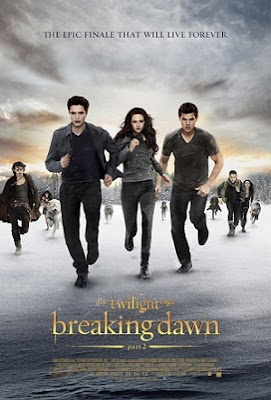 I didn't see Breaking Dawn Part 1, but it wasn't that hard to catch up with everyone's favorite shiny vampire couple, Bella and Edward, from where I left them at Eclipse. Breaking Dawn Part 2 is the payoff of the payoff. Finally all those who were too lazy to read the books can feel the exquisite relief of resolution. And to my surprise, Breaking Dawn Part 2 was a first-rate piece of entertainment, marked by brilliant writing (shout-out to screenwriter Melissa Rosenberg), heart-pounding suspense, breathtaking vistas of the Pacific Northwest, and a performance from Robert Pattinson that can only be summed up in one word: Brando.

Okay, none of this is true. But I've been criticized before for pointing out the shortcomings in this series. Nobody goes to see the Twilight movies for quality, they tell me. Okay, fine. But don't you have any standards? Actually, there were some improvements. This is the most entertaining entry I've seen. And the cast isn't as bad as it was before. For example, Kristen Stewart, whose acting has now been upgraded to corpse-plus rather than sub-corpse. She may eventually surpass Kevin Costner if she continues working long enough. (She actually seems to be feeling something this time around, definitely an encouraging sign.) Stewart's also gotten more beautiful--or at the very least, the pore refiner has increased in quality in proportion with the budget. She seems to be coming into her adulthood a little more, and that makes her more believable as a heroine. Maybe it's because she finally has some motivation beyond gushy teen love: a child of her own whom she must defend from the Volturi, that evil organization of vampires which rules all of nosferatudom and seems to be itching for a vampire vs. vampire battle. When they find out about Bella and Edward's daughter, they believe the Cullen family has broken an age-old law that forbids interbreeding between vampires and humans, and this escalates the conflict that was coming to a boil in the first four films.

Still, there's never any doubt as to how things will end up. You can hardly accuse this movie of being a cliffhanger. Okay, it's a simple matter of giving people what they want. And that's understandable. They've waited four years, for heaven's sake. What's more frustrating for a movie lover is to see a film so self-deluded: it thinks that the subdued kissing scenes and all the half-remorseful, half-horned-up glances are passion. This movie never achieves room temperature, let alone anything remotely hot enough to qualify as passion. Even the countless vampire decapitations--this film has more beheadings than Paris in 1794--lack integrity. (Obviously the filmmakers wanted a PG-13 rating, as their box office revenue depends upon the army of tweens who inundated the theater tonight.) When the vampires' heads are yanked out of their neck sockets, they look like china figures. One of them gets separated at the jaw line, but even this effect is too tame to elicit anything more than laughter. (Although the fans were cheering with reverie at each and every Volturi beheading.)

As for the other leads: Robert Pattinson is a fairly good actor, except he always seems to be playing boring roles. I think the camera itself fell in love with Pattinson. But it's not him really. It's the make-up: the pasty white skin that turns him into an emaciated-looking bloodsucker, and the burgundy lips that suggest a passionate fire underneath the cool exterior. He's the perfect Harlequin hero, and still homo-erotic enough when acting with his longtime frenemy Taylor Lautner that I would invest in their Bed & Breakfast in Vermont. (You can read about that in my Eclipse review.)

The problem with these movies has always been that everyone's too beautiful. That's the fantasy they're selling--that everyone's buying, it should be pointed out--but it really doesn't work for the genre, even if the Meyer vampire is a far cry from Bram Stoker's, or even the vampires of the 70s cult soap opera Dark Shadows. This is a Gothic for the Abercrombie & Fitch generation, which is to say it's a Gothic full of mannequins with empty heads.

The script, by Rosenberg (who has seen the series through to the end, valiantly unwilling to part with the banality of author Stephenie Meyer's ideas), hasn't a speck of irony about it, although there are a few funny parts. Most of them are little gifts, wafers for the initiated--those fans who've been faithful enough to sit through all five of the movies. There are moments where Edward and Jacob make little sarcastic comments too, showing a spark of self-awareness, and for those brief seconds the movie doesn't take itself too seriously.

But the director, Bill Condon, goes all-in in terms of giving you Twimaniacs your money's worth. Condon treats every scene either like he's uncorking a bottle of champagne or beholding the breathtaking wonder of Mount Everest. These rapturous renderings generally herald nothing more than inane twaddle between the vegetarian vampires, or "stirring" nature sequences, some of them looking a bit fakey. Bella and Edward hurdle through the crisp evergreens looking for animals to hunt, and she decides to go after a rock climber instead. A clever idea, except she's stopped by Edward and his commitment to being a decent vampire. (This film--and its predecessors-- would have been more intriguing with the ambiguity ratcheted up. Edward was never really bad enough to be the enticing rebel without a pulse. Maybe Bella could have led us delightfully astray by turning into a human-hunting bloodsucker. That would have given them an excuse for Breaking Dawn 3. But nobody's interested in seeing her veer from the straight-and-narrow. That, or the writers' idea of turning away from good is living forever young and sparkling in sunlight. How incredibly bad-ass.)

As the head villain, Michael Sheen turns in a performance that's like bad Dr. Evil. He sports a particularly lame make-up job, as one of my friends I saw the movie with pointed out to me. Sheen delivers a creepy laugh--a high-pitched, hollowed-out welt of a titter--that elicited a wave of guffaws from the audience. I was actually enjoying the audience more than the movie. Their applause was generous throughout, and you could certainly feel their excitement.

Some of the dialogue is delightfully bad. "Forever isn't as long as I'd hoped" comes to mind. Or, when Jacob refers to Bella's infant by the nickname Nessy, she exclaims with horrified indignation, "you nicknamed my daughter after the Loch Ness Monster?!" Kristen Stewart's voice is too flat to suggest real anger. All that moping she did in the first Twilight has paid off, though. It proves that pouty girls really can have it all.