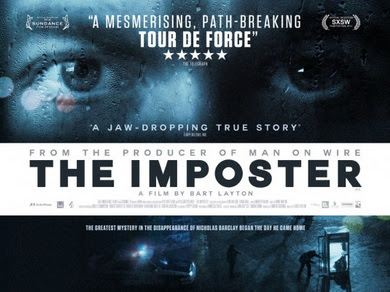 The Imposter (2012) chronicles the case of a missing 13-year-old boy named Nicholas Barclay of San Antonio, who allegedly turned up four years later in Spain. After he's identified and returned to his family, questions start to surface about the truth of his identity. Why does he have brown eyes all the sudden, instead of blue? He claims that he was kidnapped and tortured by a secret international group of military officers, but there's no evidence to support these wild and horrifying claims. Still, the family insists he's their son, despite all the glaring differences.

Director Bart Layton treats the material like an episode of Dateline. So there are interviews with real-life people and reenactments with actors. It's passably interesting, even compelling at times, but you're likely to feel swindled if you pay to see this in a theater. There's nothing particularly noteworthy about it. The case itself is disturbing, and fascinating for its sensational qualities, but Layton stretches the material to fit a feature length, and you feel the contrivances creeping up on you. Some of the interviews are unintentionally funny, and the stupidity that's captured on camera often makes you wonder if a great big joke isn't being played on the audience.

by Jacob Lusk @ pannedreview
Email ThisBlogThis!Share to TwitterShare to FacebookShare to Pinterest
Tags 2012