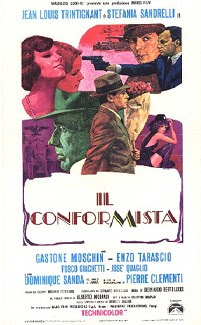 (Il conformista). Bernardo Bertolucci's The Conformist (1970) is about a man who swallows the Fascist pill with everything in him because he desperately wants to be part of the group. Jean-Louis Trintignant plays Marcello Clerici, a man whose primary motivation is to "construct" his own normalcy (heterosexual, Christian, Fascist). The story takes place in Italy and France in the 1930s, during which time Marcello becomes a member of Mussolini's secret police. When his next assignment is to assassinate one of his former professors, who's anti-Fascist, Marcello must face the tension threatening to destroy him: can he sacrifice his loyalty to his ideals for his loyalty to the State?

Bertolucci captures the essence of how the pursuit of acceptance drives people, even brainwashes them. It's a hierarchical tool that becomes internalized: Marcello remakes himself--he tries to embody the qualities, the values, and the emotions required of him--in the hope that he will be accepted. It's the same form of control utilized in every school over the last centuries: a sort of institutionalized self-rehabilitation.

This was my first Bertolucci film, and I was surprised how much I enjoyed it, despite its general weirdness. It's one of those rare movies that visually thrills you, even when you're scratching your head at some of the logic--or lack thereof--of the plot. The characters do things that often make little sense at the time, and Bertolucci plays with chronology a bit. His movie works like a Modernist novel: it's impressionistic, and it zooms in on the details of a given scene. The entirety of the plot doesn't hinge on one major, climactic event the way many American films do. (This is not to say that either method is superior to the other, but it may be one of the reasons Americans have a hard time with European films and vice versa. We want everything laid out in clearly chronological order, and dammit, it had better all make sense.) The major "event" of the film, which would probably have come sooner in an American movie, and probably would have been one of several like it, is delayed into perpetuity, to the point that you wonder if you'll have the pleasure of the payoff at all. And even when it comes it's stretched out, but with a surprising level of facility. Bertolucci manages to create a really thrilling suspense sequence that takes place in the woodsy mountains on a lonely stretch of road). He's built it up so much that you're tense from the excitement.

The mood of The Conformist is what lingers with you after the movie's over. It's ominous and stark but also fluid. The camera continually finds innovative ways into each scene. At times it has a naive playfulness to it, usually when Marcello's wife, Giulia (Stefania Sandrelli) is onscreen. She's silly, playful, and superficial, relatively oblivious to her husband's dark vocation. And Trintignant handles his character's emotional deadness well--he's not boring but he's appropriately subdued, always aware of the gravity of his ambitions and the tasks at hand.

With Gastone Moschin, Enzo Tarascio (as the professor), Dominique Sanda (as the professor's sexually ambiguous wife), Fosco Giachetti, Jose Quaglio, Yvonne Sanson, and Pierre Clementi. The screenplay was adapted by the director from Alberto Moravia's novel of the same name. The lovely, lilting score was composed by Georges Delerue. Cinematography by Vittorio Storaro. 111 minutes.
by Jacob Lusk @ pannedreview
Email ThisBlogThis!Share to TwitterShare to FacebookShare to Pinterest
Tags 1970, Bernardo Bertolucci