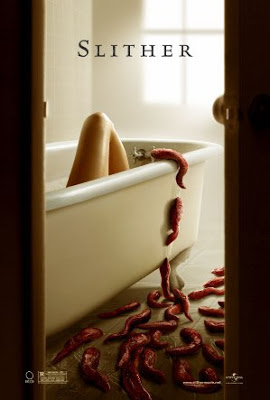 Slither (2006) is writer-director James Gunn's pastiche of every horror and science fiction film you can imagine (Invasion of the Body Snatchers, The Blob, Night of the Living Dead, Alien, etc). It's a slick, sick movie that brings new meaning to the word "icky," as a parasitic alien creature generates thousands of slimy slug-creatures that implant themselves into people's brains and turn their hosts into mindless zombies, subservient to their other-worldly master. Watching Slither is like playing connect the dots. It's kind of fun to see just how much bad-movie pop culture, which is deeply embedded into James Gunn's artistic sensibilities, manifests itself in this movie, which is alternately funny and revolting.

Nathan Fillion and Elizabeth Banks head the cast. He's the newly appointed police chief of the small town of Wheelsy, South Carolina, and she's a local schoolteacher whose husband (Michael Rooker) becomes the host of the alien creature when it descends upon the town like a shooting star from a 1950's alien invasion flick. Gregg Henry plays the foul-mouthed mayor, who tries to snatch every scene he's in by playing a terrible human being (and succeeds much of the time). Tania Saulnier plays a teenage girl whose family falls prey to the fast-moving slug-creatures. She's sprightly enough to escape them, and winds up with the police chief and his group as they attempt to ward off their zombified neighbors.

I was surprised by how horrified I was by this movie, especially since I'd seen it a couple times before. It's funny but disturbing. The slug-things look like condoms full of purply jelly, and, like the slugs in Night of the Creeps, they enter through your mouth, which suggests all kinds of horrifying things. Gunn is having a good time being suggestive here, but his movie, while amusing and suspenseful, doesn't do enough to distinguish itself. It's expected these days for horror films to be transparently parasitic, but with Slither you feel almost exhausted by the film's lack of originality. And yet it's a fun popcorn kind of movie, although it paradoxically relieves you of any appetite you might have had.

Gunn's warped sense of humor courses through the movie like a kind of anti-body to the appropriately off-putting visuals. Still, Slither is the nastier (albeit funnier) version of everything it spoofs/mimics/pays homage to. But Nathan Fillion and Elizabeth Banks add some panache to the proceedings, even if their natural charms are subordinate to the movie's slimy weirdness. Fillion goes through the entire movie with a sort of comic disbelief, and Banks is at her most engaging when she's smart and resourceful. With Jennifer Copping, Don Thompson, and Jenna Fischer, in a small role as a dispatcher.