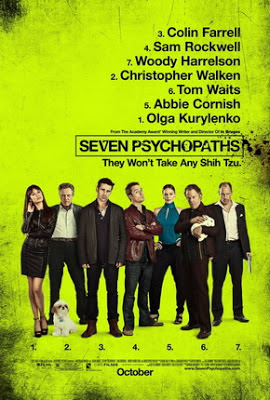 Seven Psychopaths is equal parts clever and insipid, from writer-director Martin McDonagh, whose 2008 film In Bruges turned death into something poetically transcendent and darkly funny. Lightning doesn't exactly strike twice. This is one of those movies that wants desperately to be more clever than it is. It's not as blatantly philosophical as Cronenberg's recent disappointment, Cosmopolis. But it reaches for things outside of its grasp. Deep, cosmic ironies perhaps. This overreaching tends to derail the movie, which is actually quite good when it isn't being hopelessly opaque. Thankfully, McDonagh can't resist pushing our buttons. So there are a lot of wonderfully funny moments involving a handful of truly astonishingly bad people and a few others who aren't all that bad, just mixed up with the wrong crowd.

Colin Farrell plays an alcoholic writer who's struggling to start a script. His buddy, played by Sam Rockwell, works with an aging crook (played by Christopher Walken) who snatches rich people's dogs and then returns them for the reward money. Meanwhile, a serial killer is picking off mafiosos with shrewd efficiency. The dognappers steal the poodle of one of the mob bosses (Woody Harrelson), thus turning themselves into targets of his rage.

This is really Sam Rockwell's movie. He's Farrell's unassuming chum, good-naturedly picking on him for being a drunk and busting his chops for not finishing the screenplay (he's trying to motivate him to make something of himself). But he's hiding a dark secret. We soon realize that Rockwell's character is manipulating events so that they will unwind in a cinematic fashion, with the aim of giving his buddy some poetic inspiration. I haven't seen Rockwell play this kind of a part before, and he does it marvelously. He exists in some kind cinematic limbo: part real, part fictional. Rockwell looks like he's having fun with his part. He exudes a certain casual perverseness, and as an actor, Rockwell continually reconstructs what we think is fixed about his character. He's not exactly a blank slate, but he's certainly a layered one, and he continues to surprise.

All the same, Psychopaths is considerably uneven. McDonagh was apparently trying to fashion a sort of living-nightmare vision of Hollywood, in which the all-too-typical weirdness of the golden-tinged Los Angeles neighborhoods constructs the psychotic within: the result is either lived or imagined violence. The flippancy with which McDonagh approaches his subject matter saves it from being heavy-handed. But when he shoots for ironic profundity he misses (unlike In Bruges). Happily, about two-thirds of the movie (intermittently) is still quite good.

The performances certainly bolster the movie's weakness. Farrell, who utilizes the things which made his performance stand out in In Bruges, plays a whining pacifist who's content with his ineptitude. Rockwell's high-functioning psychotic personality makes him a sort of madman-therapist to Farrell's law abiding screw-up. Walken is his usual mock-charismatic self, always providing substance to his scenes. But nothing gels as cohesively as you'd like it to. Beware: It has some incredibly violent scenes, so take that into consideration if you're horrified by horrible things. With Olga Kurylenko, Abbie Cornish, Gabourney Sidibe, Kevin Corrigan, Harry Dean Stanton, and Linda Bright Clay as Walken's hospitalized wife. 110 mins.
by Jacob Lusk @ pannedreview
Email ThisBlogThis!Share to TwitterShare to FacebookShare to Pinterest
Tags 2012, Christopher Walken, Colin Farrell, Martin McDonagh, Sam Rockwell, Tom Waits, Woody Harrelson