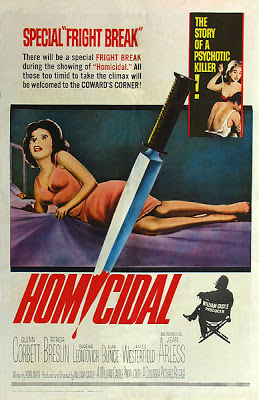 William Castle's answer to Psycho is this 1961 shocker, about a disturbed young woman named Emily, who takes care of an invalid lady in a secluded mansion. The entire cast is convincingly banal and obtuse, except for Jean Arless, as the homicidal maniac. She turns camp into art. Homicidal is a deliciously bad piece of movie-making, from a man who made all his money on gimmicks. With Homicidal, Castle devised a "fright break": Just before the finale, a clock appears on the screen, giving scared viewers a minute to leave the theater if they're too afraid to see the end. (Those spineless patrons were offered a full refund provided they stood in the 'Coward's Corner,' which was designated in the lobby, right where all the more courageous movie-goers could see you as they exited the theater.)

Homicidal isn't a very smart thriller, but its dumb storyline lends a certain charm, and you enjoy it for its quirky idiosyncrasies and its badness. The script is by Robb White. The supporting cast includes Glenn Corbett, Patricia Breslin, Richard Rust, Eugenie Leontovich, and James Westerfield. 87 mins.
by Jacob Lusk @ pannedreview
Email ThisBlogThis!Share to TwitterShare to FacebookShare to Pinterest
Tags 1961, Glenn Corbett, Jean Arless, William Castle