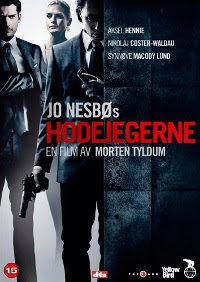 Headhunters (2012) (known as Hodejegerne in its native Norway) is about a corporate executive named Roger Brown (Aksel Hennie) who moonlights as an art thief. He feels compelled to provide a certain lifestyle for his beautiful wife, Diana (Synnove Macody Lund), and swapping out priceless art pieces with forgeries provides him the right amount of thrill and stimulation. But then he picks the wrong flat to burgle: that of a cunning ex-military tracker (Nikolaj Coster-Waldau) who once specialized in locating human beings. Thus begins a cat and mouse game that smacks of Hitchcock and operates like a ghastly horror thriller. You recall the unbearable intensity felt during something like No Country For Old Men. Headhunters grips you by the stomach and refuses to let go. It's a mixture of immense fun and dread: a nasty little movie that twists you into knots with a kind of calculating, twisted reverie.

And while it may seem like one long chase sequence, but this is a surprisingly clever and sophisticated thriller that plays you like a fiddle, which you discover just when you've started to cultivate a smattering of superiority toward it. There are rumors of a coming American remake, but watch this one instead. It's a devious little delight, and Netflix subscribers can currently access it for instant viewing.

The script by Lars Gudmestad and Ulf Ryberg is an adaptation of Jo Nesbo's novel of the same name. Directed by Morten Tyldum. With Julie Olgaard, Eivind Sander, and Reidar Sorensen.
by Jacob Lusk @ pannedreview
Email ThisBlogThis!Share to TwitterShare to FacebookShare to Pinterest
Tags 2012