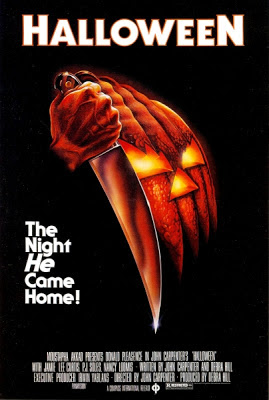 John Carpenter's films between Assault on Precinct 13 (1976) and Christine (1983) were supreme examples of how atmosphere can make a movie, and how it can compensate for other less successful attributes. Halloween (1978) is the apex of Carpenter's early career (and ultimately, of all time), full of cinematographer Dean Cundey's ominous tracking shots, and lots of creepy blue lighting, plus Carpenter's chilling--if redundant--score, reminiscent of Mike Oldfield's eerie Exorcist tune.

The story of Halloween is about as simplistic as it gets: a maniac escapes from a mental institute and returns to his hometown of Haddonfield, Illinois, which was the scene of his first crime 15 years earlier when he stabbed his teenage sister to death. For reasons unknown, he goes after three teenage girls: Jamie Lee Curtis, making her film debut, is the most resourceful among them, and P.J. Soles and Nancy Loomis play her friends, who are too busy with their boyfriends to be aware of the masked killer lurking around the corner.

A lot of Halloween is delayed gratification: Carpenter keeps you waiting for the bogeyman to strike, but often times he doesn't. His patience is almost miraculous, except for his horrible intentions. But why is he so patient? And why does he continually let Laurie (Curtis) out of his grasp? Perhaps he's playing a game with her, but because he's supposed to represent evil incarnate, the script--by Carpenter and producer Debra Hill--doesn't try to explain him, or his motivations.

Donald Pleasence classes things up as the obsessive psychiatrist Dr. Loomis, who tried to rehabilitate the child murderer for 15 years, obviously unsuccessfully. He follows the killer--named Michael Myers--to Haddonfield, convinced something bad is going to happen. Pleasence was well-known for playing villains and heels (such as Blofeld in the Bond picture You Only Live Twice). Halloween revived and redirected his career, inaugurating him as the prototype for all the old farts who permeated slasher films in the 1980s. (He's just the slasher era's Van Helsing, really. Wiser than the stupid teenagers, and cunning enough to rival the killer.)

While Halloween isn't a perfect picture, it still ranks as the best of its ilk (with the original Black Christmas just behind it). I can't think of a better "slasher" film, although it's hard to really put it in the same category as the movies it inspired (such as Friday the 13th, A Nightmare on Elm Street, and Scream). It's not all that violent, and there's almost no blood. Carpenter tries to rely on suspense to make you jump. And while he's not as sophisticated as he's been credited, Carpenter achieves the quality of a Hollywood nightmare: something controlled and very deliberate, but enjoyable when you're able to watch it at work, hitting all the right marks. It's the ultimate popcorn horror flick.