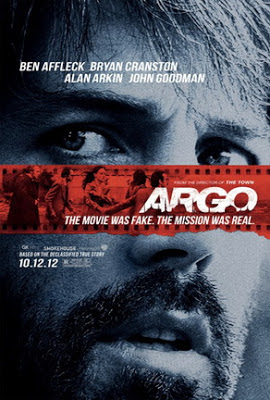 Eventually, we are going to have to forgive Ben Affleck for Gigli, Bounce, Paycheck, Jersey Girl and Reindeer Games.

His The Town (2010) was an impressive, enjoyable piece of entertainment, and once again at the helm he's done good work (mostly) with Argo, which is just about as exciting a movie as you'll get this year, although the last half hour is agonizingly suspenseful. Argo recounts (loosely) the 1980 rescue mission of the Canadian and U.S. governments on behalf of six Americans trapped in Tehran, Iran: Amidst the collapse of the Iranian government and increasing tensions between Iran and the U.S., the American embassy is besieged and most of the people inside taken hostage. Six escape, however, and they eventually make their way into the home of the Canadian ambassador.

Affleck plays Tony Mendez, a CIA operations officer who hatches a hair-brained sceme: He will go to Tehran posing as a movie producer, and pass the six hostages off as a Canadian film crew doing a location scout for a bad B-movie, called Argo. Ben Affleck has never looked better than with his black, charcoaly hair and the accompanying beard--something about it feels totally late-70s/early 80s, and it's the hair, I think, that sells his performance. You take him seriously as the man entrusted with the lives of six others.

Argo is, overall, a very successful political comic-thriller that pushes all the right buttons, sometimes with more demented glee than is enjoyable. As mentioned before, it's a stressful movie to watch, especially in the last fourth of the film--to the point that you stop feeling pleasurably excited. The finale functions as a clever form of audience manipulation, and as you feel your body move further and further from the back of your seat, your hands clasping your hair in sheer suspense, you realize you're being played like an electric fiddle. It's the movies at work, up to their old tricks again. They have this kinetic ability to hypnotize us, and yet we're somehow always aware that they're "only" movies. But the good ones defy our perception of reality. We know it's a movie, but, dammit, we have to know how it's going to be worked out.

The resulting emotion is a mixture of irritation and awe, possibly even gratitude, especially during a particularly impotent movie year. Perhaps we're victims of the crappy material to which we're subjected over the course of the movie year from January to October. By the time the handful of good movies comes out, Stockholm Syndrome has set in, and we become eager and willing participants in the manipulation of ourselves at the hands of our perverse captors.

There's a wonderful cast of grumpy old men: There's Bryan Cranston as Mendez's boss, a grizzled government veteran who stands up for his colleague's half-cocked plan of rescue; John Goodman as Hollywood make-up artist John Chambers (who won an Academy Award for his work on Planet of the Apes); and Alan Arkin as the seasoned movie director enlisted to help give Argo credibility. John Goodman is the kind of actor who makes you laugh the moment he appears on the screen. He's a jovial smartass teddy bear. And is there any actor of his generation who's as fun to watch playing a curmudgeonly hack as Alan Arkin?