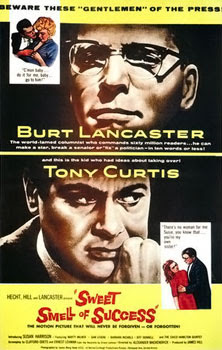 The lines between the good and the bad people are excruciatingly obvious: Lancaster is manipulative, cunning, and arrogant. (To criticize him, he believes, is to criticize the American reading public, and therefore, America itself.) Lancaster never looked more like a serial killer than in Sweet Smell of Success: with his big glasses and his blond crew cut and his large frame, he resembles a more fit version of the murderous salesman played by Raymond Burr in Hitchcock's Rear Window.  Lancaster's acting feels stiff and clunky: he doesn't seem able to convey much with his inflection or his facial expressions. It's his overall appearance that saves his performance: he looks domineering and powerful and therefore dangerous. And his sister Susie is so pathetically mealy-mouthed that you almost wish he'd squash her, if only to give her a reason to fight back. (I suppose it's a form of anachronism to want to see a stronger female lead in a 1950's movie. On the other hand, another female character--J.J.'s tough, no-nonsense secretary, played by Edith Atwater--is refreshingly strong and, even with her relatively short time on the screen, interesting, even if she's just a stock character.)

The movie falters under the dead weight of its hokey love story: an evil man trying to stop two kids who fell in love with each other? It's too easy. The script, credited to Ernest Lehman and Clifford Odets, brims with bad metaphors. It's the kind of writing that was very popular in Hollywood in the 1940s and 50s. In The Big Sleep (1946), which was another kind of film noir altogether, the lines were equally unrealistic, but so clever you enjoyed their campiness. And those lines were uttered with far more flair and mock-conviction by Bogart and Bacall than in Sweet Smell of Success. Everyone's too deadly serious to make the lines work, except Tony Curtis: He really saves the picture. He's so sleazy, so uninhibited about his selfishness, that you have to admire him, if for no other reason then the fact that he doesn't try very hard to conceal his ambitions. And even when he does, he's bad at it: he can't fool anyone that he's a nice guy.

James Wong Howe's cinematography has a vitality to it that makes the film's unappealing characters emerge as almost real human beings, wandering through their bawdy, restless city as though it were perpetually midnight. It looks like Touch of Evil, but in New York City instead of Mexico. Directed by Alexander Mackendrick. Music by Elmer Bernstein (which reminded me of Alex North's score in A Streetcar Named Desire). With Sam Levene, Chico Hamilton, Emile Meyer, and Barbara Nichols.