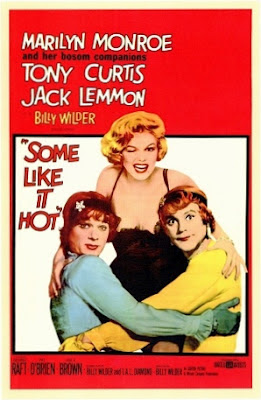 Some Like It Hot (1959) remains a smart gender-bending comedy, and while modern movie-goers may or may not agree with the American Film Institute that it deserves the title of the #1 funniest American movie, most will likely agree that it's still an amusing and surprisingly with-it comic gem.

Jack Lemon and Tony Curtis play down-on-their-luck jazz musicians who inadvertently become targets of the Mob when they witness the St. Valentine's Day Massacre in Chicago. In order to escape both the Mob and the bitter cold of the Windy City, they don some cheap wigs and women's clothes and join an all-female jazz band bound for Miami. Once there, Curtis creates an alter-ego (a rich oil tycoon with a bad New England accent) and goes after addle-headed lead singer Sugar Kane (played with a fizzy, aloof charm by Marilyn Monroe, in her prime), while Lemon becomes the target of an amorous millionaire named Osgood Fielding III (Joe E. Brown). Tony Curtis's high-pitched inflection is uncannily drag queenish, and Jack Lemon continually employs a mockish giggle that starts and ends in his throat. He actually starts to seem like an old woman, while Tony always seems like a guy in girl's clothes.

The script, by director Billy Wilder and I.A.L. Diamond (based on a 1935 French film called Fanfare d'Amour), is full of juicy bits of innuendo, uttered with just the right mixture of innocence and playfulness. Watching Some Like It Hot, you're reminded that those studio days weren't as naive as we'd like to think they were. Apparently the censors weren't clever enough to catch a double entendre, or maybe they didn't care about risque subject matter being addressed, so long as it was done in a subtle--or at least somewhat masked--way.

Is it the funniest movie ever made? That's impossible to say. But if you go and watch Some Like It Hot expecting it to live up to that kind of praise, you're likely to be a little disappointed. And forget whether or not it's an "important" comedy. (Obviously, it was a gutsy movie, and it's surprisingly still relevant.) What's worth focusing on is the film's loony comic inventiveness. All the little cliches are worked up and pushed into new directions: the mob angle, which was a sort of tried-and-true Hollywood formula, is spoofed (some of the mobsters make passes at their intended targets, thinking them to be bona fide ladies); the sham that is the art of seduction is displayed with clever honesty: Even though Tony Curtis turns over a new leaf at the end, we're not really fooled by such an incredulous last-minute character redemption. He's a hood with one thing on his mind: seducing Marilyn Monroe. And as much as I find Monroe and all her fanfare annoying, I found myself enjoying her sometimes feeble performance. In Some Like It Hot, she's vulnerable and dippy but also intuitive. You wonder how many takes it took them to get to the intuitive part, but we'll leave that to the actor autobiographies. And Curtis and Lemon make a wonderful comedy team. They later co-starred in The Great Race.