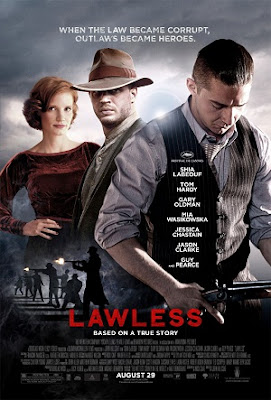 Whenever I see the caption, "based on a true story," I groan inwardly. Why must we be sold this BS over and over again? I don't care if Lawless is a documentary "as reliable as the world almanac" (to quote Bette Davis in All About Eve). That "based on a true story" line feels like exactly what it is: promotional gimmickry. It's insulting. Why must a movie be based on fact to be important? Doesn't setting a movie during the time of Prohibition qualify as interesting enough? But, I digress.

Lawless rehashes Prohibition with fetishistic brutality. It fails to achieve the things it wants to: the lionization of its main character, the showcasing of a riveting battle between good and evil, the depiction of the South in the 1930s. These are gimmicks designed to half-heartedly pin down a movie that appears to be made by and for people who get off on meaningless acts of violence. (Granted, the film's violent moments do give it a little kick, which it desperately needs at times, to keep it moving if nothing else.) At least when the mob is drilling holes into Sonny Corleone in The Godfather, you feel a sense of loss. And rooting for the bad guys to get their due isn't such a terrible thing, but in this film, it somehow feels pointless to try and distinguish the bad from the good. Despite the fact that everyone's a criminal in some way, the lines are pretty starkly drawn: the villains are utterly unlikable, the heroes are good enough to be heroes (and just as unlikable). Their main flaws are stubborness, stupidity, and excessive enthusiasm for getting even. These flaws help the movie lurch toward its conclusion, but they're hard to accept and often times maddening to watch.

Because these characters fail to engender much sympathy, you don't feel invested in their plight when Guy Pearce, who gives a mindless performance as a thuggish Chicago detective, arrives in rural Franklin County, Virginia. Pearce looks like a prissy comic book villain, sporting a slicked-back hairdo and a fancy suit and gloves. He doesn't seem to fit in this movie, nor does his emergence from the big city feel credible in the least. He's the epic villain of director John Hillcoat's dreams, and he's in this movie for sheer convenience: the script may as well read: "Charlie Rakes, who's pure evil, enters." Pearce's character wants to take control of all the local moonshiners so he can rule the town with an iron fist.

There's one holdout operation, though: the Bondurant brothers, headed by Forest Bondurant (Tom Hardy). Hardy's taciturn performance reminded me of faded black-and-white family pictures of long-dead relatives who made their livings on farms in Western Kentucky. Hardy's certainly got the tough-as-nails side of his performance down. He's a good actor, but his performance in Lawless doesn't exhibit nearly the range he's capable of. Forest is joined by his two brothers: perpetually drunk Howard (Jason Clarke) and cowardly Jack (Shia LaBeouf). Jack is the runt of the litter who wants to rise in his brothers' estimation. Thus, he's constantly trying to prove himself and generally unsuccessful in his attempts. Jack's stupid mistakes account for much of the plot's predictable progression toward what we expect will be a bloody showdown between the Bondurant boys and Guy Pearce. But if you go back far enough, you'll see plenty of movies about Prohibition, and most of them are at least more interesting than this one, which is only mildly entertaining at best and creepily violent at worst.

The film's overly deterministic, trigger-happy progression becomes more than irritating and tiresome: it makes you resent the writing (the script is by Nick Cave) and the directing. The story is too carefully constructed--it maximizes the shock value but still has the nerve, or maybe the foolishness, to try and tug at your heartstrings: Jack develops a little light romance with a preacher's daughter, and at the end, the film tries to wrap things up with a nice domestic ending. Hardy falls for Amanda Chastain, a Chicago dancer who's tired of the big city and is hired to tend the bar at his restaurant. Neither of the female leads is given much to do. (One more unpleasant reminder that women still have a rough time getting good parts in movies. They're always having to settle for this kind of banality, it seems.) If you can get a thrill out of the endless slayings with knives and other sharp instruments, and if you can buy all the syrupy stuff that's thrown in between to make the movie seem more layered, you'll surely find Lawless to be some great piece of entertainment, rather than what it is, which is a waste of time.