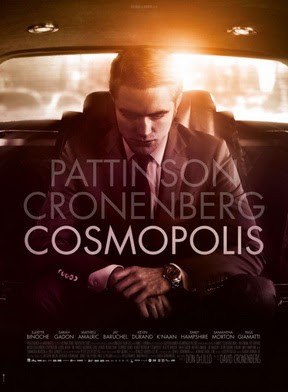 David Cronenberg finds new ways to punish his long-suffering audience with Cosmopolis, based on the book by Don DeLillo. It's about a young New York corporate billionaire (named Eric Packer) who journeys across town (for a haircut) in his fancy, high-tech limousine. This is supposed to be an anti-capitalist odyssey, where Eric discusses life and politics and money and culture with various people, including his cold, distant wife and several sexual partners. He's made a bad business calculation that's costing him millions, and has decided, in a sense, to go down with the ship.

While Cosmopolis throws some interesting ideas at you, the total effect is deadly dull. The ideas are approached in a cerebral, academic way that feels antithetical to movies and the reason we go to them. They may be apropos, especially in today's economic climate, but just being relevant intellectually doesn't make a movie. A movie needs to be experienced on more than a solely intellectual level. Cronenberg may be aiming for some kind of transcendent experience, in which the intellectual becomes visceral. (Many of his films are incredibly visceral, and smart too, so it's more than a little disappointing that he couldn't pull this off with more finesse.) But Cosmopolis doesn't succeed in making that leap. It stagnates within the first 10 minutes: the cars that creep along past the limo, as though in slow motion, might serve as a symbol for this film's sluggish immobility. It's all symbolic of course, but are we supposed to congratulate movies for how literary they can be?

Robert Pattinson is too bland an actor to give the film much life, but then that's the real problem with this movie: his blandness is perfect for it. It's a movie about the lifelessness of the Super Rich, whose charmed existences aren't overshadowed by the problems of normal people. I kept waiting for something more interesting to happen, for these ideas to develop into a movie rather than a series of hokey dialogues, but that something never came. The big scene at the end between Pattinson and Paul Giamatti, who plays one of his disgruntled former employees (who wants to kill him) is just another drawn-out conversation about philosophy and capitalism, like the many that come before it. The script, by Cronenberg, often feels like the work of a lazy, pretentious creative writing major.

I kept wanting to like this movie, in all honesty, but I was so bored it was hard to see past the flaws mentioned above. So, to end on a semi-positive note, I will say that this may be the kind of film you like more the second time around, once your expectations aren't so high. Cosmopolis clocks in 109 minutes, but feels much longer. With Jay Baruchel, Kevin Durand, Juliette Binoche, Samantha Morton, and Sarah Gadon.
by Jacob Lusk @ pannedreview
Email ThisBlogThis!Share to TwitterShare to FacebookShare to Pinterest
Tags 2012, David Cronenberg, Juliette Binoche, Paul Giamatti, Robert Pattinson