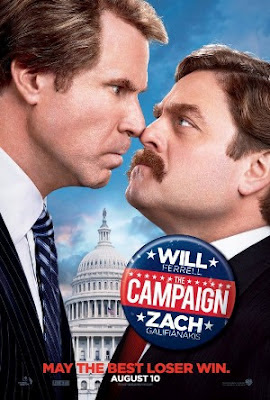 Disappointingly undercooked political comedy. If you're hoping that The Campaign will provide some leavening comic relief from the election blitz, you may feel you've simply sunk even lower into the bowels of American politics by the time the credits roll. Will Ferrell and Zach Galifianakis, as rival contenders for a North Carolina Congressional district, prove how convincingly they can play horrible people. There are scattered laughs, but the movie tries to have it both ways: it's a showcase of the unmitigated greed and buffoonery of politicians who don't have the first notion of what it means to actually do their job, as well as a dirtified Frank Capra-ish tale of what it would be like if a truly honest politician were elected to perform some much-needed housecleaning. Neither tack works, because The Campaign fizzles pretty soon after it begins. The characters have no appeal, most of the actors aren't all that funny, and the scattered laughs only point up the amount of time there is between them. The audience I was with seemed to overcompensate with its laughter during the funny moments, as though we were laughing at what we hoped would be a funny movie that was only intermittently successful. And, if vulgarity turns you off, you would do well to avoid this movie. Crassness can be very funny, but only when it's clever. Here it's just chaotic and stupid.

Jay Roach once again demonstrates his infantile directorial sensibilities. He turns an ostensibly golden premise into a not-ready-for-publication waste of time, with little help from the writers, Chris Henshy and Shawn Harwell. You can tell that Ferrell and Galifianakis improvised a lot, but their mugging doesn't work as much as they probably hoped. (Ferrell never was all that funny unscripted.) Of course they have their moments. Both of them reek of comic potential, but they never do enough with their characters, which are essentially stereotypes: the good-old-boy politician who can't keep his pants on and talks in platitudes, and the creepy, prissy mama's boy who is inexplicably married with two sons. They never transcend these paper-thin roles, and you get the feeling it's because they haven't thought about what could be done with them. Will Ferrell always looks too self-contented with the mediocrity of his work.

There were a few actors in the supporting cast who give the movie a little pizzazz: Katherine LaNassa plays Ferrell's spouse, the ultimate trophy wife who knows how to play the supportive "other half" on screen as long as she gets what she wants. And Dylan McDermott, as Galifianakis' campaign manager, looks self-assured and cruelly dedicated to his job, which is being funded by two rich old brothers (played by Dan Aykroyd and John Lithgow) who remind you of the old millionaires in Trading Places. In fact, The Campaign borrows more than a little from that movie's plot line.