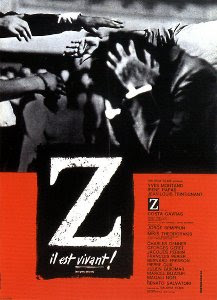 A fascinating look at the 1963 assassination of Greek pacifist and political activist Grigoris Lambrakis, Z (1969) is a fast-moving study of political corruption and the subtle ways government uses red tape and compartmentalization to aid its own propaganda and silence voices of dissent. Director Costa-Gavras is Greek by nationality, but his film is in French, where he has lived since the 1950s. It's an astonishing comment on corruption both right and left, and it's surprisingly energetic for such a talky film. You don't generally expect these kinds of movies to hold up 40-something years later, but the camera remains a fluid eyewitness to what feels at many times like a documentary. It's as if you're watching a rapidly edited version of C-Span, with intermingled shots of people protesting in streets, and of revolutionaries being attacked by the police and their paid hoods. For people who imagine the future as one of Orwellian proportions, Z suggests that we're in for more of this subtler kind of sleazy erasure of facts, doctoring of evidence, and manipulation (or silencing) of anyone who's willing to speak the truth. It's not as overtly horrific as something like 1984. It's the game of being powerful enough to pay off your enemies, or have them killed in "accidental" car accidents, or their autopsies re-written to corroborate falsified accounts.

Z was the first foreign film to be nominated for a Best Picture Academy Award (it won in the Best Foreign Language category). But it deserves more recognition for its witty and insightful view into post-WW2 international politics. It may have been all the more timely in terms of its reception in the U.S. because of our own notorious assassinations and their associated plots, however real or imagined. The world of Z is frighteningly real and present (even as this film nears 50 years in age), and it has an ominously prophetic view of the media's involvement in political maneuvering.