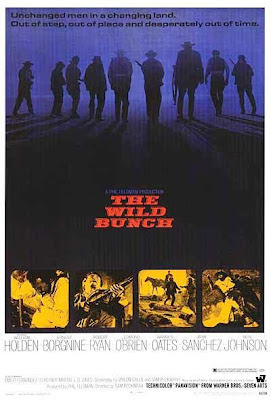 The Wild Bunch (1969) may be responsible for giving the Western film some new breath. Its director, Sam Peckinpah, was known for his use of brutality, and in The Wild Bunch he gives the violent seems some kind of poetic elegance. (They have a kick to them that you don't exactly enjoy, but it's exciting nonetheless.) There are a number of striking sequences which make The Wild Bunch a memorable Western even 43 years later. The three that stand out the most are one at the beginning, where the band of outlaws robs a bank; one in the middle, where they blow up a bridge; and the final showdown between the main characters and an army of Mexicans, where the machine gun they've just handed over to the Mexicans is then used in a show of mutual annihilation.

The problem with The Wild Bunch is its length. At two hours and twenty-three minutes, it goes on and on and on, and the exciting moments aren't enough to make up for the long, poky stretches. It reminded me of that incredibly drawn-out wedding sequence in The Deer Hunter. There's a point where a director's attempt to contrast violence with more jovial, laid-back sequences becomes overstated, and Peckinpah is guilty of this in The Wild Bunch just as Michael Cimino was in The Deer Hunter.

The cast is noteworthy: William Holden, Ernest Borgnine, Robert Ryan, Edmond O'Brien, Warren Oates, Jaime Sanchez, Ben Johnson, and Strother Martin. The performances are as brutally real as the surroundings. This is certainly the anti-Butch Cassidy (a light-hearted version of the same idea, also released in 1969. You can't fault Peckinpah for wanting to make Westerns tough and unashamedly gritty again). And there are some funny throwaway lines. Martin calls someone a "two-bit, redneck peckerwood." (He was also the one who uttered the most famous line in Cool Hand Luke. He has a way with dialogue that is all his own.)

William Holden really carries this movie. Between Holden's performance and Peckinpah's vision, the two of them endow The Wild Bunch with a sense of the beauty of hopelessness. The tragic ending that's destined for these criminals is right because it's inevitable, and it's not delivered with any kind of moralistic hubris. Rather, Peckinpah is pointing out the futility of things. Perhaps that's the appeal of this kind of movie, and the ultimate appeal of the Western genre. And Peckinpah's influence is still felt in movies. His shoot-out sequences have been plagiarized over and over again. Despite all this, I found myself looking forward to the final credits. It's the kind of movie I can appreciate more than I can truly enjoy.