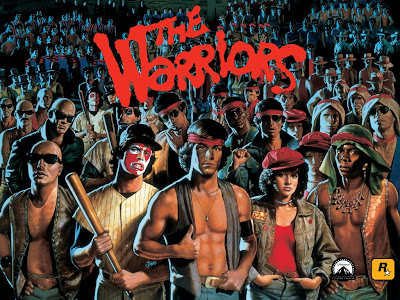 The Warriors (1979) is a cult classic, one that reminds you a bit of John Carpenter's Assault on Precinct 13 (1976), except the gang members aren't reduced to robotic killers. They're often comic figures in The Warriors. Just about everybody's deadly serious, and that's probably partly because most of the actors are inexperienced. But their green amateurishness lends a certain authentic charm to the movie. It's so much a part of its decade. The tumult of the 60s and early 70s had given way to a kind of urban decay by the late 70s. Rather than trying to examine why youths turn to gangs for their sense of belonging, The Warriors takes such ponderings for granted. It gives a brutal but surprisingly not heavy-handed window into one night in their unpredictable lives.

The story is set in motion at a massive assembly of representatives from about 100 gangs from the New York area, where one gang's charismatic, cultish leader, Cyrus, proposes that they unite, turning their considerable numbers into a makeshift army rivaling the NYC police force by about 40,000 men. When somebody assassinates Cyrus, the Warriors are blamed for the murder, and they spend the rest of the night trying to make it back to their turf, pursued by various gangs, most of them sporting ridiculous names and costumes. It's all a part of this movie's visual schtick, which is sometimes a bit obvious, but always really amusing. There's one gang called The Baseball Furies. Adorned in face paint that makes them look like mimes, they strut around in baseball uniforms and brandish wooden bats as weapons. Not very intimidating, although the image of them conjures up the Joker in your imagination.

Michael Beck heads the small band of Warriors trying to escape assault after assault (not just from the rivaling gangs but also from the incompetent police officers). He's a compelling looking lead: stony and thin and handsome in a bland sort of way. His power doesn't extend into his acting all that much, but again, the wooden performance suits the material, which is designed like a comic book come to life. (It reminded me of some of George Romero's movies, especially the scenes in Dawn of the Dead where a large band of bikers breaks into the shopping mall, as well as the weird jousting-on-motorcycles Arthurian drama Knightriders.)

You shouldn't see a movie like The Warriors expecting brilliance. But it's a fast-moving, energetic little action thriller. The fight scenes are sometimes dated, but they're not embarrassing, and the cast is fit enough to make them convincing. They have a real kick to them at times. One scene in particular comes to mind, where the Warriors are hiding in the stalls of a train station bathroom. You know they're in there, but you don't know how they're going to surprise their attackers.