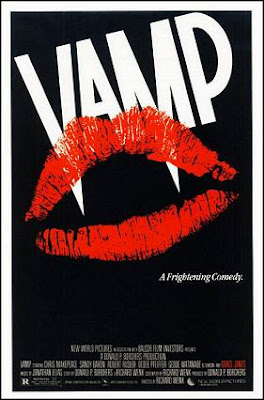 Low-grade horror-comedy about two buddies who stumble upon a strip club full of vampires in a city that is, by night, a hot-bed of bloodsuckers. The "head" vampire, Katrina (Grace Jones), is a tall, fangy creature with Egyptian roots, so the movie suggests. But she's really not that scary or intimidating, and unlike the suave, charming vampire Chris Sarandon played in the original Fright Night, she isn't any fun. She's just a freak.

Chris Makepeace and Robert Rusler have an amiable chemistry together, especially in the beginning when they're being hazed by a particularly infantile group of frat brothers. But the film doesn't make much use out of that charm. Director Richard Wenk (he co-wrote the screenplay with Donald Borchers) doesn't have much of a flair for creating suspenseful situations. The movie has a nice comic book feel, but the simple-minded plot keeps it from generating into anything fun or exciting. Just about every scene promises more than it delivers: Makepeace is chased by a gang of thugs into a sewer system, which seems like it could have been used for a good scare sequence, but the thugs don't go in after him, and it lessens the impact.

There's an odd combination of green and pink neon lighting that permeates the movie, giving it a nice "red light district" feeling, but it's overused, and it doesn't do much more than conceal the fact that the movie wasn't designed with much thought or imagination. The lighting becomes a crutch rather than an enhancer of real atmosphere. With Dedee Pfeiffer, Gedde Watanabe, and, in an amusing role as Katrina's guardian/manager, Sandy Baron. 1986.
by Jacob Lusk @ pannedreview
Email ThisBlogThis!Share to TwitterShare to FacebookShare to Pinterest
Tags 1986, Chris Makepeace, Dedee Pfeiffer, Gedde Watanabe, Robert Rusler