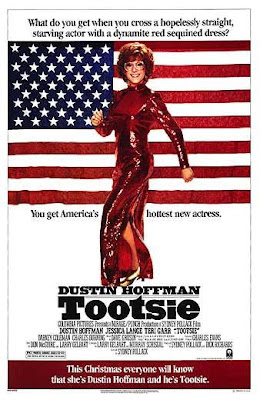 Dustin Hoffman in drag looks like Jane Fonda in Nine to Five crossed with the homicidal tranny in Dressed to Kill. Hoffman plays Michael Dorsey, a dedicated actor who gives good advice to his students (he teaches acting class to supplement his income) but fails to implement it in his own life. Michael's a has-been actor, perpetually ignored at auditions because he's too old or to young or too short or just generally "not the right fit." He waits tables while awaiting the next big part, and scolds his students for not trying to make work for themselves. (That's the one bit of advice Michael tries to follow: he's raising money to self-produce his buddy's play.) But nothing works, and even Michael's agent seems oppositional toward his career. So, in a moment of audacious desperation, he makes himself over as a woman (named Dorothy Michaels) and wins a big part on a daytime soap opera, as a gutsy hospital manager named Emily Kimberly.

The first half of the movie is just about the most inspired comedy material to come out of the 80s. That's probably because there's so much interplay between Hoffman and Bill Murray, his roommate, and Teri Garr, Michael's long-time friend and more recently, his lover. The moment you see Bill Murray you start laughing, because he has a goofy charm to him that doesn't require him to say any words. He's just naturally funny with his half-blitzed stare, as though he were possibly stoned, or possibly figuring out solutions to every problem in modern society, or both. But in some kind of alternate universe where he's content to keep it all to himself. And Teri Garr projects a marvelous frenetic energy to her role as a neurotic actress who's too self-conscious to make it past the first audition. She really comes alive, and she and Murray and Hoffman have a loose, fun chemistry together.

But the second half of the movie feels too commercial, too self-satisfied. It's a recurring problem for the director, Sydney Pollack, who also appears as Michael's agent. The year before, Pollack directed Absence of Malice, which was a proficient newspaper drama, but like Tootsie, it wasn't forceful or exciting enough to rise about its banal cleverness. Pollack seems to be the most laid-back director in recent memory (he certainly projects a likable calm as an actor, even when he's exasperated by Michael's flights of temper and petty complaints about show-business). I suppose one could take for granted that Dustin Hoffman in drag is enough force to sustain a comedy all by itself, but when it's given the 80's commercial treatment, it starts to lag. In particular, the part where Michael, as Dorothy, accompanies his co-star, Julie (Jessica Lange), to her father's house in upstate New York for the weekend. Michael lets slip his attraction for Julie, who naturally thinks that he is (as Dorothy) a lesbian. Meanwhile, Dorothy's father (Charles Durning) develops the hots for Dorothy and eventually asks her to marry him. It sounds wacky and screwball-comedyish, but in the hands of Pollack, it all seems just a notch about the melodramatic soap opera that the characters appear in. Perhaps he's trying to reign in the insanity. It's safer, more controlled, but the avoidance of risk-taking takes the edge off the comedy, and it starts to resemble a banal sitcom.

The actors really do to pull this thing off. They are, in the end, enough to make Tootsie a fun and often laugh-out-loud funny movie. It's got a lot of clever lines and a to-die-for supporting cast, which also includes Dabney Coleman as the soap's director, George Gaynes, Geena Davis, Doris Belack, and Lynne Thigpen. And above all, Tootsie is a movie about actors and acting, and more than most movies, it gives the profession its due, not only speaking to the soul-crushing rejection that so many actors face, but the endless dedication many of them put in. It also makes fun of actors, and turns the profession on its head, which keeps Tootsie from seeming like a proprietor of a bunch of self-congratulatory martyrs. And let's not forget how much fun gender confusion really is. It's an eternal source of great farce, from Shakespeare's Twelfth Night to Mrs. Doubtfire. (Even when films like Tootsie and Mrs. Doubtfire don't sustain themselves to the end, there are still pleasures to be had, like the wonderful comic performances we get from them.) 1982.
by Jacob Lusk @ pannedreview
Email ThisBlogThis!Share to TwitterShare to FacebookShare to Pinterest
Tags 1982, Bill Murray, Dabney Coleman, Dustin Hoffman, Geena Davis, George Gaynes, Jessica Lange, Lynne Thigpen, Sydney Pollack, Teri Garr