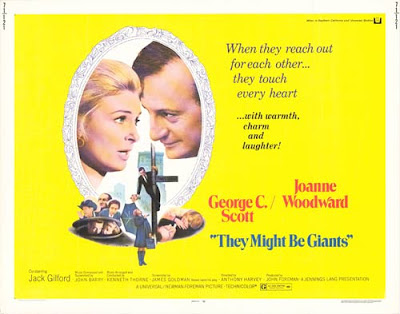 Fans of either Sherlock Holmes or the two leads, both of whom are better than their material, will be disappointed by this junky, meandering movie. It has a lot of energy, but no structure to channel it, and if it's supposed to be a comedy, it isn't a very funny one. There aren't any good set-ups, and the only real joke in the whole production--Justin's madness and the world he's created as a result of it--isn't enough to sustain this mess of a movie. Scott seems miscast as Sherlock Holmes. He might have been more appropriate if this had been about the judge. Woodward is a believable headshrinker who's married to her work and has no life outside of it (she would later play the psychiatrist in Sybil), but there's something unappealing about seeing her play such a drab, pathetic role. Maybe it's too easy for her. She and Scott have some chemistry together, but their relationship is a failed attempt to bring back a kind of screwball comedy vibe.

And let's not forget the ugliness of the 1970's New York that's portrayed in this movie. Lots of grungy buildings and gloomy skies and dirtiness. Presumably, director Anthony Harvey was trying to recreate that industrial England feel of the Victorian era. He doesn't have the cleverness of Arthur Conan Doyle to transcend the setting and make it interesting, a place full of mystery. Doyle's London was a breeding ground for imminent possibilities. New York is too, but not the way it's seen in this misfired comic mystery. The only real mystery here is how they couldn't have come up with a better script.

With Jack Gilford, Al Lewis, and Rue McClanahan. Goldman adapted the screenplay from his own theatrical version, which ran in London in the early 60s. It should have stayed there. 1971.
by Jacob Lusk @ pannedreview
Email ThisBlogThis!Share to TwitterShare to FacebookShare to Pinterest
Tags 1971, Al Lewis, George C. Scott, Jack Gilford, Joanne Woodward, Rue McClanahan