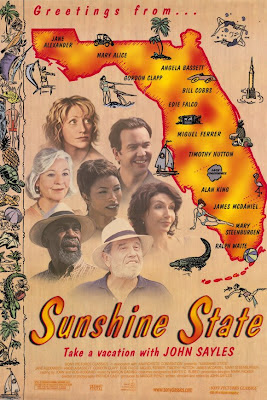 Sunshine State (2002) was filmed mostly in Northeast Florida, and it's a kind of living biography of a fictional resort town called Delrona Beach. Writer-director John Sayles has crafted an absorbing, if overlong, movie, headed by Edie Falco and Angela Bassett. They both play women who grew up in the area, and they only have one brief scene together, at the beginning of the movie. But while they barely cross paths during the course of the film, their relationships do connect, from their family members and their friends and neighbors, to the developers who are perched like buzzards, waiting to buy up as much property as they can. The developers want to sell the image of Florida, the Florida of cheap mythology. There are a series of amusing scenes of four retired men playing a round of golf (they bookend the movie), one of whom is an aging investor and developer, who waxes on philosophically about how Florida was marketed to the outside world, and how the developers learned to make the marketing a reality. "Nature on a leash," he calls it.

I have no idea if John Sayles has any real relationship with or affection for Florida (he was born in New York), but he has touched on a number of very real things about how Florida has been marketed over the years to people weary of shoveling snow and enduring bleak, sunless stretches of time. The Florida of palm trees and golf courses and gimmicky alligator petting zoos is not the Florida I know (although those things have always been no more than an hour's drive away). But it is the Florida in most outsiders' imaginations, and finally here comes a movie that looks at the people who have set up roots here, for generations, who seem like natives to the state only because they've been here longer. They're facing pressure to sell, but also pressure to stay, to maintain a bygone way of life that is perhaps now just as imaginary as the faux-Florida imagery.

The characters are richly developed, and the scenes between them build subtly. You won't find the whimsical lightness suggested by the poster (an ironic marketing oversight that mirrors the dishonest marketing of Florida, perhaps?). It's not exactly heavy, either, though. It has a laid-back feel to it. The tone of the movie is casual, even if the characters are dealing with plenty of heavy issues. Sayles is particularly interested and invested in looking at the relationship between the black community, which had carved out a space for itself in the 1940s and 1950s where they could finally breathe, and the white community, which finds subtle ways to maintain a safe distance, but also tramples over civil rights through government regulations and sneaky backdoor deals with the county commissioner's office.

There's one totally implausible scene where Falco's mother (Jane Alexander), an eccentric "impresario" who runs the local community theater, unexpectedly turns into a slick negotiator with the company that wants to buy their businesses (a motel and a restaurant, both of which are in the way of the big developer's plans to reinvent the community). You can't help but snicker at how ruthlessly she takes over the meeting and turns the deal in her family's favor (surprising even her daughter, especially because the investors had pegged her as a non-threat, a woman who's too caught up in voluntary theater projects to worry about numbers and figures). But midway through the scene, you start wonder if this isn't a moment of true hypocrisy, for this artist to suddenly be so interested in profit, and in selling out. She explains that running a non-profit theater has made her business-savvy. You can only buy it because Jane Alexander's performance is so good. Her character's doing a self-adapted production of Faulkner's As I Lay Dying, and indeed she seems to have come from the pages of a Faulkner novel. (Many of the other characters do as well.)

With Mary Steenburgen, as a local woman who runs an annual parade that tries to promote "local" businesses using every cliched Florida-esque gimmick in the book, from pirate ships and buried treasure to alligator exhibitions. Steenburgen plays it with a sense of aloof devotion. Her character wants desperately to be ignorant of her own irrelevance, but she can't completely convince herself of the lie. Also starring Mary Alice, Bill Cobbs, Timothy Hutton, Ralph Waite, Miguel Ferrer, James McDaniel, Tom Wright, Alan King, Marc Blucas, Alex Lewis, Richard Edson, Cullen Douglas, Perry Lang, and Gordon Clapp.