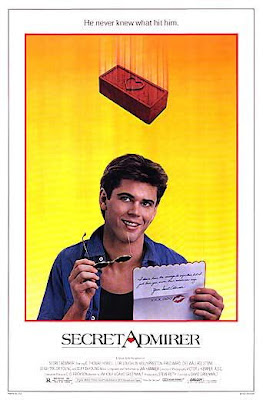 Michael (C. Thomas Howell) and Toni (Lori Loughlin) are childhood friends, now high schoolers. Toni has a mega-crush on Michael, but he's head-over-heals in love with her self-absorbed friend Debbie (Kelly Preston), so Toni writes him an anonymous love letter that causes a whole bunch of trouble for them and their parents. When Michael inadvertently slips the letter into his dad's night-school textbook, his mom (Dee Wallace) finds it, and thinks her husband is having an affair. The letter eventually gets seen by the dad's teacher, who happens to be a long-time friend, and who in turn believes he's coming onto her. This is the stuff of Shakespeare, people.

Secret Admirer (1985) was directed by David Greenwalt (he also co-wrote the script, with Jim Kouf). Neither of them has the imaginative vision to take their story into original directions, so you can pretty much guess where every situation is headed, and the implausibility of it all threatens to put a damper on the good things in it, namely, its sweetness. Plot complications are the only way the writers could fill the time, while there's a wonderful pool of acting talent waiting for some good scenes.

The actors still manage to come through with some lively performances, but you wonder what could have been done had there been stronger material. Fred Ward stands out as Debbie's father, a live wire police chief who doesn't take well to the thought of his wife screwing around with one of their oldest friends. Kelly Preston seems overly convincing. She plays the shallow blonde, a girl who utters such unknowingly ironic statements as, "I don't want to go too far on our first date. Could you hand me my bra?"

Co-starring Cliff De Young and Leigh Taylor-Young as the other halves of the two grown-up couples, all of whom turn into children as fast as their own children are trying to act like adults. Michael's goofy friends (who have an amusing camaraderie together that numbers among some of the movie's most amusing sequences) are played by: Casey Siemaszko, Geoffrey Blake, Rodney Pearson, Courtney Gains, and J.J. Cohen. Also with Scott McGinnis, and a young Corey Haim as Michael's brother, who's always stealing money out of his brother's wallet.