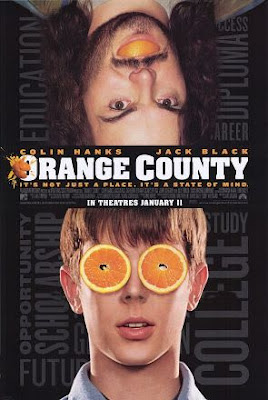 Orange County (2002) isn't offensive, exactly, but it isn't a very good movie, either. It's about an aspiring writer named Shaun (Colin Hanks), who's convinced that he needs to go to Stanford and study with a writer he's stuck on. The movie is about the various misadventures that take place in one 24-hour period during which Shaun tries to get accepted, after the dippy college counselor at his high school (Lily Tomlin in a bit role) sends in the wrong transcript and he gets rejected. That's an interesting idea, but the writer of Orange County, Mike White (who plays a small role as Shaun's English teacher), is running on empty from the very beginning.

The earnest performance of Colin Hanks (son of Tom Hanks) is one of this movie's strongest attributes, yet the writing is so undeveloped that you never really buy his whole aspiring-literary-talent thing. He's a nice guy. That's about all we get.  We see him transform from stoned surfer to would-be Ernest Hemingway, but there's no real impetus for his transformation, other than the sudden death of one of his surfing buddies, an obvious plot device. And if you're paying any attention at all to the movie, you'll see how many of these plot devices White relies on in his script. For example, Shaun's brother, Lance (played by Jack Black), is a ne'er-do-well junkie who's mooching off his family, and it's his stupid behavior that bungles a meeting between Shaun and an influential Stanford board member. Later, it's Lance who sets up an astoundingly contrived chain of events that gets Shaun into the school.

This movie doesn't know how to show its feelings, such as disappointment, frustration, grief, or joy, and so it turns to catchy pop songs to convey its emotions by proxy. Is it any wonder that a movie produced by a music conglomerate like MTV fails in its grasp for authenticity? You start to think they just made it so they could sell the soundtrack. Perhaps the audience saw through this: Orange County wasn't exactly a hit.

There's a slew of talent associated with the film, but don't expect much when the material is this sloppy. Director Jake Kasdan (who helmed last year's abysmal Bad Teacher) has a sitcom-level mentality, and he doesn't know how to work with the actors. They're all emotionally maxed-out characters at the beginning, and so there's nowhere for them to go emotionally. They fizzle. Catherine O'Hara has a few good moments as Shaun's drunk mother, but even she isn't allowed to reach her wonderfully loony potential. (She does some similar (but better) work in an episode of HBO's Curb Your Enthusiasm.) Kevin Kline puts in a brief spot as the idolized writer, whose appearance marks the film's climax, but he's reduced to the role of the "wise artiste," providing Shaun (and the movie) with some tripe about writing. When you see a performer like Kevin Kline playing such a boring role, it gives you little hope for the future of comedy in movies. Also present are John Lithgow as Shaun's dad, Chevy Chase as the high school principal, Brett Harrison and Kyle Howard as Shaun's perpetually stoned surfer buddies, and Schuyler Fisk (daughter of Sissy Spacek) as Shaun's good-natured girlfriend, the only sane person in his life. And Jack Black, who is an often dizzying force of energy, is all over the place with his mugging. (There are too many stoners in this movie for any of them to stand out, for one thing.) He needs a good director to channel his crazed brilliance. Without that, he's utterly unfunny.

The really ironic thing is that Orange County presents the adults as complete morons: the guidance counselor's gaffe generates the entire meandering plot, the parents are miserable, clinging people. They're divorced from each other and both in unhappy, unsuccessful re-marriages (for all the wrong reasons). The teachers are either stupid or disingenuous (or both). And yet, we're expected to believe that Shaun turned into a sophisticated, responsible young man amidst all this incompetency. And to top it off [SPOILER ALERT], the movie has the nerve to go Frank Capra on us at the end: Mom and Dad get back together, Son gets into Stanford via their generous financial donation to the school, he decides that home really is where the heart is, and we're all happily-ever-after-together. [END OF SPOILERS.] It's amazing that such an essentially square movie could come from the people at MTV, who seem so convinced that they are the purveyors of what's hip. Perhaps they're turning over a new leaf. They've learned that banality is safer than originality. Oh wait, that's not a new concept to them at all.