A Night in Casablanca 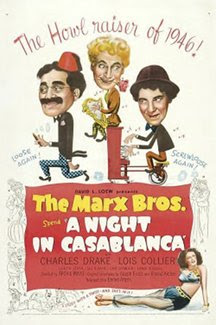 Very likely, not many people from my generation are familiar with The Marx Brothers. When I was about 12 years old, and an impressionable young movie buff, the American Film Institute released its laughably arbitrary list of the "100 greatest movies ever made." While I spent too long trusting in the infallibility of this list (ironically, they updated it, removing some movies and adding others, as well as adjusting the ranking of many of the titles--how do you rank movies like this anyway?), it exposed me to many movies I would never have sought out, including Duck Soup (1933), which was the last Marx Brothers movie to feature all four of them. (They had been making movies since the early 20s.)

A Night in Casablanca (1946) comes near the end of their filmography, and as the title suggests, it's a spoof of Casablanca. Spoof might not be the best word. Imagine that Bogie and Bergman have left the hotel, and a Vaudeville comedy team has set up shop, trampling over their romantic setting with a lot of ridiculously over-the-top sight gags. While many of the fast-talking comedies of the 30s and 40s have dated terribly (that sounds like a wonderful set-up for a Marx Brothers joke, actually), A Night in Casablanca is still really funny. I usually have to watch old comedies with a respectful air of appreciation, which is perhaps more painful than genuine disdain for a movie, especially when you're told how great the picture in front of you is supposed to be but you're just not getting it.

Instead, I found myself laughing out loud repeatedly at Groucho, Harpo, and Chico, who all work in a hotel in Casablanca where a Nazi officer is currently hiding out, because the hotel is rumored to contain a bounty of misplaced treasure. The previous hotel managers having died under mysterious circumstances, a new manager is brought in, and he's played by Groucho Marx. The other two brothers play hotel employees who eventually team up with Groucho when they find out his life is in danger. There's also a lovely German vamp of a woman, who's playing everybody from the hotel manager to the Nazi commander, so that she too can get her hands on the loot.

The highlight is the scene where the officer tries to pack up his clothes, and the Marx Brothers find a myriad of uproariously funny ways to slow him down, without his ever realizing they're in the same room with him. You have to see it to believe it. Luckily, for you Nextflix instant play users, it's currently available for online streaming. I heartily recommend this, a great comedy. Looking forward to A Night at the Opera, which reputes to be on par with the hysterical Duck Soup.