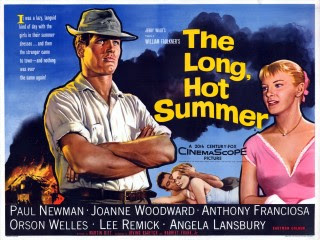 You'd be surprised to discover that a movie as commercial as The Long Hot Summer (1958) came from a few stories by William Faulkner, culled from his three-part novel The Hamlet and another short story called "Barn Burning." It may contain the seeds of Faulkner, but it's been filtered through the MGM mill and turned into a glossy-looking soap opera about a Mississippi patriarch named Will Varner (Orson Welles) who wants to marry off his 23-year-old daughter Clara (Joanne Woodward) to a slick stranger named Ben Quick (Paul Newman), whose reputation as a barn burner precedes him. Will sees in Ben Quick a youthful version of himself: someone bold and sly and opportunistic, and with enough charm and charisma to con anybody.

The screenplay by Irving Ravetch and Harriet Frank, Jr., is full of movie lines that could never be mistaken for realistic dialogue. That's part of the fun, because the actors are so skilled and so much fun to watch as they turn the bad poetic lines into intentional self-parody. You always feel that the cast is winking at you, that they aren't taking The Long Hot Summer too seriously, and neither should you. But the movie has a certain pull to it, too. Director Martin Ritt knows how to keep a movie from going dull. His chief appeal is the cast, which is full of fresh-faced young actors, most of them trained at the Actors' Studio (a fact which is said to have caused a certain degree of conflict with Orson Welles, who didn't have a background in the Method, and who may have looked down on it as an inferior acting technique.) Ritt keeps the cameras on the faces of his mostly attractive cast. Welles has been made-up to look older, and his weight, which had accumulated in the last few years, has turned him into something unintentionally comical. He looks the part, a bloated Southern tycoon who refuses to be contradicted by anyone. Welles turns his dialogue into food: he's gobbling the lines so ferociously that it's difficult to understand what he's saying half the time. (Many of his lines had to be re-recorded later because they weren't intelligible).

Everyone in this movie is in heat. (This is, first and foremost, a movie about sex: who's getting it and who isn't getting it and who's contented with it and who isn't.) Joanne Woodward's character, for one, isn't getting it, and moreover she's feeling pulled in too many directions: her domineering father wants grandsons to carry on his family name (a concern for which he exhibits a certain dogged obsession). Her longtime gentleman caller, Allan (Richard Anderson), is content to maintain the status quo. Allan treats her like a respectable eternal virgin, and she responds to this with a certain degree of graciousness because it seems like the right way to be treated. Ben Quick riles her, because he treats her like a woman with full of passions. It's the fact that he can sense her desires without her acknowledging them that steams her, and attracts her, to him. But she can't let herself like him too easily, because that's what her father wants. It's all delightfully uncomplicated complication, and only the ending, where too many dramatic points are wrapped up too easily, feels clumsy. The rest of the movie is breezy and energetic.
With Anthony Franciosa as Will Varner's simpering son Jody, who can't compete with the new rival, Ben, for his daddy's respect; and Lee Remick as Jody's trophy wife, a giddy young thing who spends most of the picture being chased around playfully by her amorous husband. Also with Angela Lansbury, as Will's longtime companion, a no-nonsense innkeeper named Minnie Littlejohn.
by Jacob Lusk @ pannedreview
Email ThisBlogThis!Share to TwitterShare to FacebookShare to Pinterest
Tags 1958, Angela Lansbury, Anthony Franciosa, Joanne Woodward, Lee Remick, Martin Ritt, Orson Welles, Paul Newman, Richard Anderson