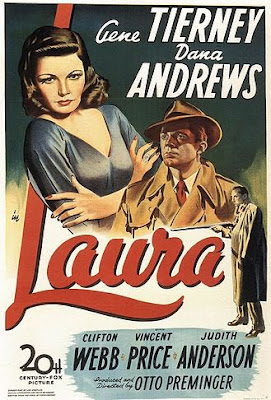 In Laura (1944), a gruff detective lieutenant (Dana Andrews) falls in love with the dead woman whose brutal murder he's investigating. People have often gotten perhaps too much giddy excitement about the cop who "fell in love with a corpse," but then, it's essentially the same obsessive fascination that has made Vertigo one of Alfred Hitchcock's most talked about films. The girl, Laura, is first introduced to us via flashback, through the memories of her acquaintances, a ruthless assortment of nasty characters that includes Clifton Webb as a prissy columnist (whose performance captures brilliantly the essence of a highfalutin literary snob); Vincent Price as an opportunistic Southern heel who lacks the money to be a playboy on his own, and must milk the purses of his wealthy female companions; and Judith Anderson as Laura's self-serving aunt, who's in love with Price even though he mistreats her. Gene Tierney, as Laura, has a chic beauty that draws the camera to her face and her features. It's easy to see how Andrews' character would become retroactively obsessed with her. The movie itself is of that old-fashioned society murder mystery variety. You don't so much care about the mystery being solved, as long as you can revel in the nastiness of these conniving people, all of them motivated by their little private agendas. The scene where Andrews spends the night staking out Laura's apartment is memorable, because, without losing his tight-lipped demeanor of professional self-control, Andrews displays just how much Laura consumes his thoughts.

David Raksin composed the sentimental score, which includes the now classic title song (it lingers over every dramatic scene like smoke from a blown out candle, tainting the atmosphere). The music turns Laura into some kind of grand soap opera, kept in check by Andrews, who's as hard and unflowery as Laura is soft and beautiful. That may be why Laura remains a popular example of silky, melodramatic film noir: it has a perfect mixture of overindulgence and efficiency. It was directed by Otto Preminger, and adapted from Vera Caspary's novel by Jay Dratler, Samuel Hoffenstein, and Elizabeth Reinhardt.
by Jacob Lusk @ pannedreview
Email ThisBlogThis!Share to TwitterShare to FacebookShare to Pinterest
Tags 1944, Clifton Webb, Dana Andrews, Gene Tierney, Judith Anderson, Otto Preminger, Vincent Price