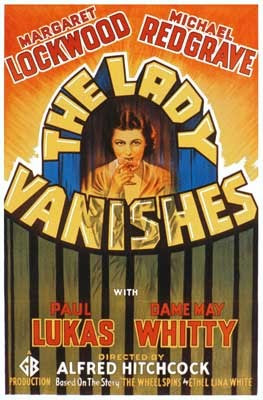 Fans of Alfred Hitchcock's later work should take a look back at some of his early films, made in his home country. The Lady Vanishes (1938) numbers among the best of those British movies. It's a clever, fast-moving adventure about a seemingly harmless elderly woman (Dame May Whitty) who goes missing aboard a train bound for England, and only a young woman (Margaret Lockwood) named Iris seems to have noticed that she was ever on board at all. Iris ropes a fellow passenger (Michael Redgrave) into looking for the missing woman, but everyone else seems to be withholding information. This is light-hearted and engrossing entertainment at its best, bolstered by a sincere performance from Margaret Lockwood, who's constantly being one-upped by Michael Redgrave's witty, charming performance. She matches him in her stalwart forthrightness, though. She's like a tougher, pluckier version of the character Joan Fontaine played in Hitchcock's adaptation of Rebecca, two years later. They have a lovely romantic chemistry together, and Hitchcock's penchant for finding the humor in every situation is at its peak here.

Some of the elements in The Lady Vanishes have dated of course (for example, you can tell that much of the movie's backdrops have been filmed prior, and that the coinciding foreground action is taking place on a set). But the movie is nearly 75 years old, and it seems silly to fault it for the inevitable effects of the passage of time. And a picture that's still so fresh and entertaining after so many years is worth watching. Also starring Paul Lukas, Cecil Parker, Linden Travers, Naunton Wayne, Basil Radford, Mary Clare, and Googie Withers.
by Jacob Lusk @ pannedreview
Email ThisBlogThis!Share to TwitterShare to FacebookShare to Pinterest
Tags 1938, Alfred Hitchcock, Margaret Lockwood, May Whitty, Michael Redgrave