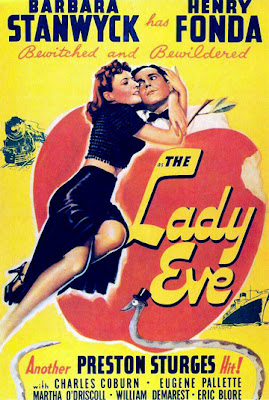 In The Lady Eve (1941), Henry Fonda plays an oblivious millionaire who studies snakes, and who's returning home from a year in South America, when he meets an attractive woman (played by Barbara Stanwyck) on a cruise ship. She's got designs on him, or more accurately, on his money. She's a cardsharp who works alongside two older men, one of whom pretends to be her wealthy oil tycoon father. But when she falls in love with him for real, complications arise.

Barbara Stanwyck gives one of her most engaging and enjoyable performances in this smart comedy, written and directed by Preston Sturges. The scenes are well-thought-out so that you enjoy waiting for the punchlines, and it's wonderful fun watching Stanwyck play Fonda like a fiddle. She's expert at saying fast lines effortlessly, as though she'd ruminated carefully over every word before speaking it, and Fonda is a delightfully befuddled fool, a man who's mostly unaware of her flirtations, making love to her only inadvertently.

Fonda's character is, of course, unbelievably gullible, but this is one of those contrivances that allows the plot to function as amusingly as it does, so it's difficult to harp when you're having such a good time watching it all unfold.