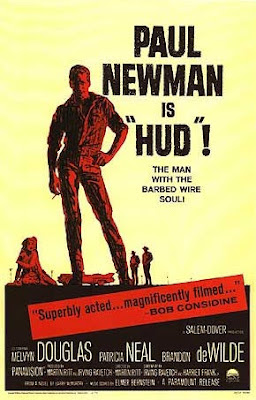 Hud (1963) is just about the only great Western I've ever seen, and one of the great entertainments of the 1960s. It's a grown-up Western, set in modern times and unconcerned with Indians and lawless towns. Instead, Hud concerns itself with the encroaching decay of civilization. It's a battle waged between the aging rancher, Homer (Melvyn Douglas), a man who lives his life according to the law, like Moses with a cowboy hat, and Hud (Paul Newman), his son, who doesn't put much stock in morality, and has a reputation as a womanizer. Homer despises him, and Homer's 17-year-old grandson, Lon (Brandon deWilde)--Hud's nephew--idolizes him, to a degree. (Lon seems to be making up his mind about things for most of the movie.) Lon sees Hud as independent and charming. He leads an exciting life (as exciting as one life can be in a flat Texas cattle town), always bedding a different married woman in town, living it up at the local bar. Hud represents the kind of excitement that is denied someone of Homer's strict moral constitution.

There's an arc written into the story--which was adapted by Irving Ravetch and Harriet Frank, Jr. from Larry McMurtry's novel Horseman, Pass By--about Homer's cattle being infected with foot-and-mouth disease, which forces Homer to have every single one of his cows shot in a big, dramatic scene near the end of the movie. This scene was held up as a somber, powerful moment of modern tragic cinema by some critics, and criticized as audience manipulation by others. I would argue that it's somewhere in the middle. It's mostly the plot contrivance that gets the action of the movie rolling. The characters, and their pieces of the overall story of Hud, are what make it a fascinating, tough, lean, and outstanding movie. The cows are merely fodder.

Newman gives one of his best performances: he's mean and selfish, and even suggests unloading the cattle (which could potentially spark a nationwide epidemic) rather than take an enormous loss by killing them, but it's hard not like Paul Newman, even when he's a boor. It is one of those brilliant casting choices in movie history, because as bad as Hud is, and as convincingly as Paul Newman plays him, it's still Paul Newman. There's no pleasure from hating Hud, the way you get a kick out of despising a nasty villain (and such contempt is usually rewarded when said villain suffers some kind of justice for his wickedness at the end of the movie). Instead we're lead deeper into Hud's amorality, as though we could start to buy into some of his logic simply because it's him pitching it. And there's nothing all that appealing about what stodgy old Melvyn Douglas is peddling. He's sanctimonious and weather-worn, and we're led to believe that the two go hand-in-hand with such a principled existence applied over some seventy years.

Patricia Neal, as the sexy-plain housekeeper Alma, also delivers a good performance. She keeps pouring cold water on Hud's sexual advances, but always with a look of coy design in her eyes, as though she's turning him down to build him up for the ultimate acquiescence. Neal and Douglas won Academy Awards for their performances, and Newman was nominated, but once again lost. Cinematographer James Wong Howe also won an Oscar for what is an impressively mounted picture that moves along with a sort of deceptively breezy consistency. Howe and director Martin Ritt manage to make the film weighty without feeling portentous: he turns a genre piece into a movie with panache and real narrative style.

(For this review, I must give some credit to Pauline Kael, whose piece "Deep In the Divided Heart of Hollywood" goes into further detail on the appeal of Hud, why it's a great movie, and why critics at the time of its release, despite much praise, missed out on why it was so great. Her thoughts have certainly helped shape mine, even though I loved the picture well before I read the review. You can find that essay in her book I Lost it at the Movies.)