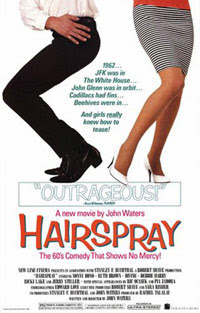 It was inevitable that filmmaker John Waters, Baltimore's King of Trash, would go mainstream, if only briefly. His Hairspray (1988) is an affectionately kitschy tale of dancing and integration in 1962 Baltimore. Ricki Lake plays the heroine, Tracy Turnblad, who is probably the first fat girl to be the star of any teen comedy. It's a wonderful thing: finally a movie that doesn't glorify skinny little things. It vilifies them instead. Waters revels in the bad taste of middle-class Americans, and even when he's doing it for a mass audience, he manages to be coy and ironic (without seeming mean-spirited, no mean feat.) The mainstreaming of Waters' schtick works for him: it evens out some of the over-indulgent aspects of his brand of filmmaking. Hairspray feels like a movie, where some of his earlier films (such as the notorious 1972 cult film Pink Flamingos) had that insufferable "home movie" feel to them which made watching tedious, even as you waited eagerly for the next shocking moment.

Lake's mother is played by the inimitable Divine, the drag queen who worked on almost every John Waters picture. Divine died unexpectedly, just a week after Hairspray opened. Divine has always imbued Waters' pictures with a sense of legitimate American white trashiness. As Tracy's mom, Divine is quite a showpiece, draped in a moo-moo, sporting a long black wig, and that wonderfully campy, butch persona. Divine's bizarreness keeps Hairspray from ever looking like some benign Hollywoodized teen comedy.

And the supporting cast is equally marvelous and macabre: Sonny Bono (the ultimate used car salesman of cinema) and Debbie Harry (sporting an outlandish blonde wig that transcends the campy fashion that Harry has always brandished as the frontwoman for the punk rock band Blondie) as the villains, Franklin and Velma Von Tussle; Colleen Fitzpatrick as their daughter, Amber (she looks like Kelly Preston), who hates Tracy because she becomes a popular regular on a local TV program called "The Corny Collins Show," whose host (played by Shawn Thompson) is sort of Baltimore's Ed Sullivan (a young Ed Sullivan). Ruth Brown turns in a deliciously fun performance as "Motormouth Maybelle," the black diva who is friends with the "Corny Collins Show" and helps unite the black and white communities with her goofy rhyme-speech. She's a hoot; The always hilarious Jerry Stiller plays Tracy's dad. He has a wonderful kookiness about him that makes him look simultaneously out of it and sharp as a tack; Michael St. Gerard plays Link, the boy who falls in love with Tracy on the dance floor (he looks astonishingly like Elvis Presley, and even played him in the movie Great Balls of Fire!); Leslie Ann Powers plays Tracy's best friend Penny; Clayton Prince as Seaweed; Waters regular Mink Stole plays Corny's assistant, Tammy; and Joanna Havrilla plays Penny's uptight mom, Prudence, who's so terrified of black people that she hands a black man her wallet while walking through the Baltimore ghetto, assuming he's trying to rob her when he isn't.
by Jacob Lusk @ pannedreview
Email ThisBlogThis!Share to TwitterShare to FacebookShare to Pinterest
Tags 1988, Clayton Prince, Colleen Fitzpatrick, Debbie Harry, Divine, John Waters, Leslie Ann Powers, Michael St. Gerard, Mink Stole, Ricki Lake, Ruth Brown, Shawn Thompson, Sonny Bono