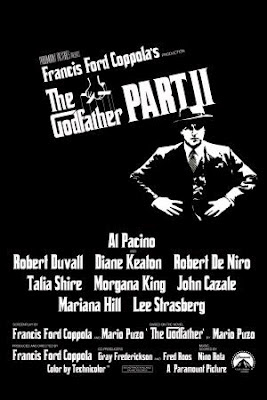 In the first Godfather, Michael Corleone (Al Pacino) never believed he could be sucked into his father's way of doing things. And in The Godfather Part II (1974), he can't accept that he has. His corruption happens quickly but subtly. Under the guise of vengeance, of protecting family honor, Michael becomes a tragic fallen hero. Director Francis Ford Coppola and author Mario Puzo have created a sequel that fills in a lot of detail for us, simultaneously depicting Michael's rise as the new Don Corleone and the life of young Vito (played in flashback by Robert De Niro) as he leaves Sicily for America and gradually begins a life of crime.

There are moments of greatness in The Godfather Part II, and moments of great drama. Some of the images stay with you, and considering how much it attempts, much of this movie is a smashing success. The actors are exceedingly good: Pacino shines darkly. You can see the transformation he's undergone in his face, which was once innocent. Now it has a yellow patina of greed and an addiction to power. Diane Keaton gets some stronger material in this sequel as well. She's the good wife who's stuck by Michael for longer than she should have, who's looked the other way too many times now. De Niro is a solid Vito (it's no small feat filling the shoes of Marlon Brando), Talia Shire adds a new level of depth to Connie, Michael's sister, who was always getting roughed up by her sleazy husband Carlo in the first one. In Part II she's given herself over to money and things, at the expense of her family. But then she experiences something of a reversal of character, and she rises up to be the family's new matriarch. It's fascinating to watch all these performances and the depths to which the actors take them.

But it's lacking something. Many critics have proclaimed this an even better film than its predecessor. They praise it for deepening the material, for elevating it to a mythological status. It's just that in the process of demonstrating how far Michael has fallen, the movie too seems to lose its soul. Despite the fact that he had already been corrupted by the end of the first Godfather, that film left you with a sense of ambiguity. That perhaps things were going to be different. After all, Michael's involvement in murder had been about "vengeance" and "justice." But in the sequel, we start to see the consequences of that. It's beautiful and compelling yet bleak and depressing. And the powerful scenes are linked by many scenes that lumber along. (It's three hours and twenty minutes long, where the first was under three, a significant difference.) The tacked-on ending, a flashback of the days before WW2, when all the children were alive, but grown, feels too TV-movie-ish, like Coppola was already showing signs of the bad judgment that would taint his directing ever after. (It is nice to see James Caan reprising his role as Sonny, if ever so briefly. His absence is really felt--Sonny was such a presence, such an iconic character, and Caan turned him into a hot-headed bad boy who you liked because of his brashness and his macho love for his family.)

Part II deserves credit for what it does and what it is: a very good movie, and a compelling study of the soul-destroying power of an America that has built-in methods of abiding criminal activity. It also gets at the things which knit this family together, and the myriad forces which tear it apart. With Robert Duvall, John Cazale, Lee Strasberg, Michael Gazzo, G.D. Spradlin, Richard Bright, Bruno Kirby, Morgana King, and Gianni Russo.
by Jacob Lusk @ pannedreview
Email ThisBlogThis!Share to TwitterShare to FacebookShare to Pinterest
Tags 1974, Al Pacino, Diane Keaton, Francis Ford Coppola, G.D. Spradlin, James Caan, John Cazale, Lee Strasberg, Robert De Niro, Robert Duvall, Talia Shire